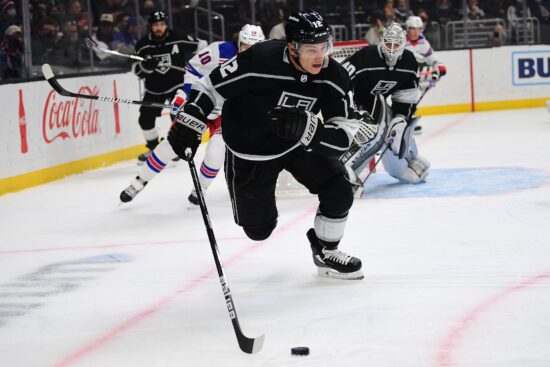 The Pittsburgh Penguins had a 10-game win streak snapped during their current road trip, falling 3-2 in Dallas on Saturday. Mike Sullivan’s squad has bounced back by beating Anaheim 4-1 on Tuesday though and looks to start another streak when they visit the Los Angeles Kings on Thursday night at the Crypto.com Arena. L.A. has won 4 of their last 5, but oddsmakers still have to set them at +125 against these red-hot Penguins.

Penguins Getting Another Winning Run Going

Pittsburgh avoided a rare losing streak by rebounding from the loss to the Stars to topple the Ducks 4-1 on Tuesday. Normally a win over Anaheim would be taken with a grain of salt, but Dallas Eakins has the team playing well as they are in 2nd place in the Pacific and four points ahead (45) of the Kings.

It was another solid outing on Tuesday for the Penguins’ top 10 scoring offense (3.3 goals/game) with Evgeni Malkin and Jeff Carter doing all the damage with two goals apiece in the 4-1. That offensive output marked the 5th time in the last six games that Pittsburgh has scored 4+.

Tristan Jarry was again solid in net for Pittsburgh topping 25 of 26 shots vs. the Ducks. Jarry has now held eight of the last nine opponents to 2 goals or less, the one game he did not was the loss to Dallas when the Stars connected on 3 of 32 shots. Jarry has even started in back to back wins on January 5th and 6th as backup Casey DeSmith is in health protocols.

L.A. With the Home Stretch

Los Angeles is in game 7 of a stretch where they play 9 of 10 games at home. Even the lone away game of that span is a 1-hour flight to San Jose so it’s safe to say the Kings should be pretty comfortable right now. They are playing very relaxed too, winners of four of their last five games pushing their record to 12-8-2 at the Staples Center / Crypto.com Arena this season.

The Kings definitely still have their work cut out for them on Thursday night. Jarry is playing well in net for Pittsburgh and L.A. is having some questions on offense. Anze Kopitar is on an 8-game goalless streak but luckily Trevor Moore is stepping up with 2 goals and 5 assists over the last four games.

Los Angeles is just the #23 scoring team in the NHL (2.7 goals/game) but they also only give up about that many as their 2.6 goals allowed is 6th lowest in the league. It will be interesting to see who Todd McLellan goes with in net after Calvin Peterson has started the last two games and allowed just 1 goal on 45 shots – both Kings wins. Jonathan Quick looms too though but he’s allowed 3+ goals in four of the last five.

Los Angeles has been home for a considerable amount of time but Pittsburgh has also won 10 of their last 11. Both goaltenders are on a pretty good hot streak right now and it looks whoever comes out on top in this one might do so with only 2-3 goals.