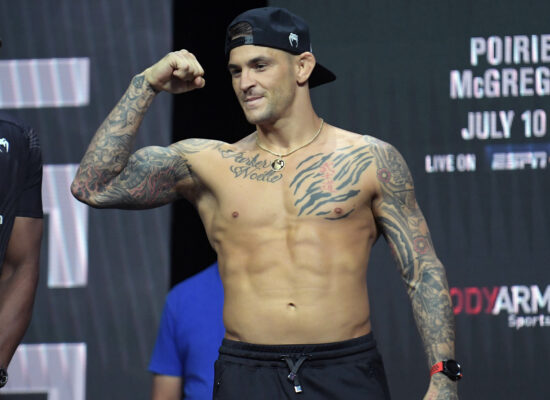 What many hoped to see will finally happen. Two American heavy hitters, Dustin Poirier and Michael Chandler are set to fight at the UFC 281 in New York later this year. The fight is added to the already stacked card, and it could turn out to be one of the best this year.

The bookies released the initial odds, and according to the same, Dustin Poirier is a -200 favorite. On the other side, Chandler is +170 to triumph.

These two guys are aggressive and very attractive warriors to watch. Their approach in the ring always provides excitement, which is why both have a massive fanbase.

Poirier is a former title challenger, once against Khabib Nurmagomedov, against whom he lost at the UFC 242 in Abu Dhabi. He bounced back after that, beating Dan Hooker and Conor McGregor twice, before losing another lightweight battle, only this time to Charles Oliveira.

Michael Chandler also lost to Oliveira in a title bout at the UFC 262. The Iron, as the fans call him, had a nice chance to take the belt, but missed finishing Oliveira after his furious start. After that, Chandler had one epic contest against Justin Gaethje, which he lost via unanimous decision. In his latest appearance in the ring, the American smashed Tony Ferguson via a highlight-reel front kick.

There were some rumors that the organization tried to book this clash for a while, and it seemed that the UFC 281 was the perfect PPV event for it.

Izzy and Pereira Leading the Way

The UFC 281 is scheduled for November 12 in New York at the famous Madison Square Garden. As mentioned, the main event here is the clash between Israel Adesanya and Alex Pereira for the UFC middleweight title.

So far, Adesanya has dominated the division, beating all of the top rivals, some of them twice, and still didn’t met his match. On the other side, Pereira quickly rose to the status of a challenger after only three bouts in the UFC. He defeated Andreas Michailidis, Bruno Silva, and most recently, Sean Strickland, whom he KOd in the first round at the UFC 276.

Pereira holds two wins over Adesanya back in the days when these two were still kickboxers, and one of those losses was via KO. However, Izzy is the favorite here at -170, while Pereira sits at +160.

In other fights, the co-main event is the women’s strawweight bout between the champion Carla Esparza and the challenger, Zhang Weili. Also, several more contests are attracting the attention of the fans, including the lightweight clash between Dan Hooker and Claudio Puelles, the light heavyweight bout Dominick Reyes vs. Ryan Spann, and another women’s strawweight fight, Molly McCann vs. Erin Blanchfield.