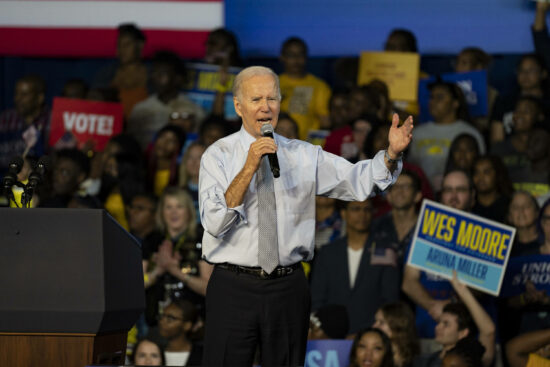 Polls were suggesting a red wave of republicans definitely winning the House and possibly even the Senate, but early returns suggest those numbers were way off. It does look like the House will flip to the red, but the Senate is a toss-up that leans towards the democrats.

Even with some very key races still up in limbo, the focus is starting to turn to the Presidential race in two years. Donald Trump is expected to announce another run as early as a week after the mid-terms, but many in the republican party are ready for some new blood, especially after the showing Ron DeSantis had in Florida on election night.

Whether it’s the 76-year-old Trump or the 44-year-old DeSantis, perhaps the biggest question in the 2024 Presidential race is who will represent the democratic party? That’s almost never a question when an incumbent is up for their second term but 79-year-old Joe Biden doesn’t seem fit to be the leader of the free world into his 80s. There are plenty of Biden props as to whether he will even finish this first term.

Biden has had many gaffes over his first two years as President. He’s had to have the Easter Bunny run point on navigating a crowd, has repeatedly shaken hands with air, has a longstanding rivalry with the steps of Air Force One, and may or may not have “Poped his pants” in a trip to the Vatican. Those really aren’t on Biden, more so a party that runs a cognitively declining senior citizen for the most stressful job in the world.

It’s going to be Biden’s personal stumbling and mumbling that may have the Democrats looking to oust him sooner rather than later because he’s still pushing through the policies that they approve of. Here are some Biden prop bets to keep an eye on over the next month…

Biden’s approval rating has dipped as low as 36% in July, but then climbed all the way to 44% in August. Over the fifth quarter of his term his average hovered at 41.3% which seems good – but is actually the second lowest for a President post-World War II. If the Republicans do win the House, it will handcuff Biden’s legal agenda which actually is going to help him.

Like the rest of the world, Americans are facing a long Winter which could possibly include a shortage of diesel and natural gas – not ideal heading into the cold weather. As the temperatures drop, so will Biden’s approval.

The favorite for the Joe Biden exit date is 2025 at (-250). This would mean he either gets beat in 2024 or decides not to seek a second term. It would be nearly impossible to see Biden completing a full second term but ‘not before 2026’ has the second highest odds at +525.

The best bet here would be Biden stepping down in 2023, either because of his health or so the democrats can get VP Kamala Harris familiarized with the office to prepare for a 2024 run.

Oddsmakers like Biden to pull out a full first term at -350, but he may be ousted by his own party before then or it’s very possible he isn’t healthy enough to continue the final two years. The only value here is, of course, no.