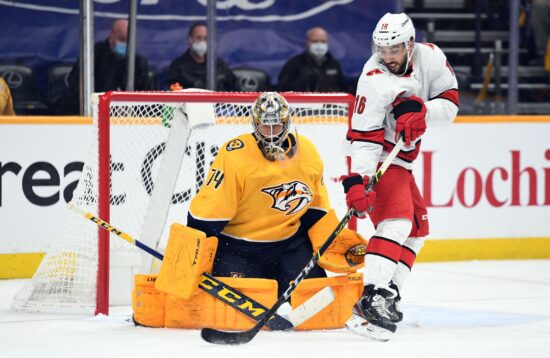 Training camps around the NHL are set to get underway shortly, but that hasn’t stopped teams from making last-minute deals ahead of the new season. The NHL is set to return to its original format for the 2021-22 season, which means squad depth will be essential for all teams this coming year.

Two teams that are considered outsiders to win the Stanley Cup with BetOnline.ag have made moves over the past 24 hours, but how does it affect their odds for the coming season?

It was revealed on Monday that the Nashville Predators had agreed a four-year deal with Juuse Saros. The new deal will see the goaltender earn $20 million over the course of the deal. The franchise were certainly happy with the business that they have done, as they believe that they have one of the best young stars in the league for the coming season.

Saros was selected by the Predators in the NHL Draft back in 2013. He made his first start for the franchise in defeat during the 2015-16 NHL season. However, he went on to play over 20 games in both the 2016-17 and 2017-18 seasons. Last season, he became a more prominent player for the Predators, as he played 36 times in the regular season. He was on the losing side on just eleven occasions. Saros averaged a save percentage of .927 during the regular season, and allowed just 2.28 goals against. The goaltender also impressed during the post-season, despite the Predators early exit. He averaged a .921 save percentage and allowed just 2.78 goals per game in six playoff fixtures.

However, despite the announced signing of Saros, the Predators remain huge outsiders with BetOnline.ag to win the Stanley Cup. They are currently priced at +5500.

The Columbus Blue Jackets also did a bit of business this week, as they announced that an entry-level deal had been signed with Ole Julian Bjorgvik-Holm. The deal is a three-year contract. He was selected by the Blue Jackets in the NHL Draft last year, and impressed during stints in Norway and North America last season.

He was in great form, as he scored three goals and made 12 assists for Manglerud in his homeland. Bjorgvik-Holm made his North American debut later in the season for the Cleveland Monsters. The 19-year-old certainly has international ability, as he has already represented Norway. He played for his country in the IIHF World Championships earlier this year.

However, BetOnline.ag expect this coming season to be a bit of a struggle, as they are huge outsiders for the Stanley Cup. They are currently priced at +10000 to win the famous trophy. Only the Anaheim Ducks, Arizona Coyotes, Buffalo Sabres, and Detroit Red Wings have higher odds.