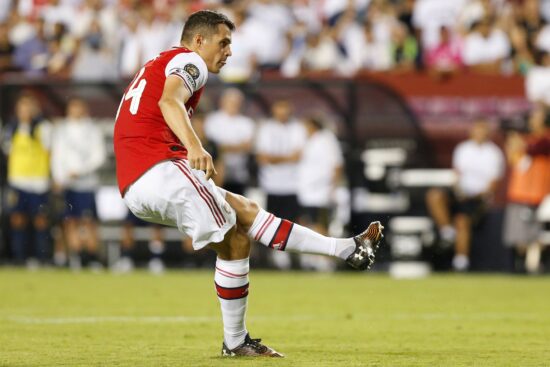 Following the international break, the English Premier League is back on track now, and we already have one major derby on Saturday. Arsenal meets Liverpool at Emirates, in what is the central match of Round 30.

Both teams need to win and keep their UEFA Champions League prospects. Liverpool is in a bit better position having more points than Arsenal, but that doesn’t have to mean anything.

Will Arsenal Finally Show Some Consistency?

The main problem for Mikel Arteta and his team is inconsistent performances. To be straight here, the Gunners have one of the most expensive teams in the Premier League, and for some reason, they aren’t justifying the amount of spent money. The ninth position in the standings, with eight points short of the place that leads to the Europa League, is pretty embarrassing.

They are coming into the match against the Reds with two straight games without a win, a loss in the EL to Olympiacos 0-1 (Arsenal advanced on aggregate), and a 3-3 draw vs West Ham on the road.

For a while, the defense was perfect at home, having four straight clean sheets, but right now, in five consecutive events at Emirates, Arsenal conceded at least one goal. This gives you an ideal picture of the inconsistency we’re mentioning.

Liverpool’s Focus on the Champions League

The Reds meet Real Madrid on Tuesday, and we are pretty sure that all of their players are focused on that game rather than on Arsenal. And the way things are going in the EPL, it seems that Liverpool has more chances to win the UCL and earn the ticket for the next edition in such a way than by finishing among the top four teams in the domestic league.

Klopp’s side was in a very problematic shape during March and February, but the latest two games indicated that they might bounce back. Victories against RB Leipzig 2-0 in the UCL and a narrow triumph at Molineux against Wolves, 0-1 are giving hope to the army of fans that things might be better in the future.

Now, Liverpool’s latest games have all been low-scoring affairs, with the previous seven all under 2.5 goals and with just one side netting.

Arsenal vs Liverpool Head to Head

This will be the fourth match this year. The first was a Community Shield in which Arsenal won, 2-1. Liverpool would get even in the Premiership clash, 3-1 at Anfield, while Arsenal won in the EFL Cup after penalties at the same venue, getting the edge back on their side.

Who wins the Arsenal vs Liverpool game on Saturday:

This is going to be one cautious and defensive-minded game. Arsenal won’t be eager to attack and expose its shaky backline, while Liverpool, on the other side, is perfectly fine with one point before the game against Real Madrid. Therefore we expect a low-efficient affair.