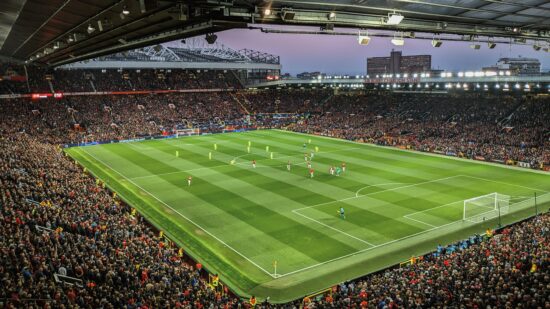 Image via Alex Motoc on Unsplash

If you’re looking for the best Premier League predictions, you’ve certainly come to the right place!

That’s right – the wait for the start of the new Premier League season is finally over!

All 20 teams will be in action across Premier League matchday 1, with Arsenal and Crystal Palace getting the 30th league campaign underway on Friday. You can find a rundown of all ten fixtures taking place this weekend below, as well as the Vegas odds.

It has been a busy summer at the Emirates, with Gabriel Jesus and Oleksandr Zinchenko among the big-name signings. However, their opening day record in recent seasons has been far from perfect, as the Gunners have lost on the opening day in five of the previous nine seasons.

The fixture computer has once again been kind to Liverpool, as they open the campaign against a newly promoted opponent for the fourth season in a row. The Reds looked formidable in the Community Shield last weekend, with Darwin Nunez quickly opening his account for Jurgen Klopp’s side.

Fulham ran away with the Championship last season, with Aleksandar Mitrovic scoring a record 43 goals in a single season. The forward will once again be key to his chances, and he will be looking to better his tally of three goals in 27 games from the 2020-21 season. However, we can’t see him opening his account against the Reds, as Liverpool should have far too much for the Cottagers.

Steven Gerrard’s first full campaign at Aston Villa gets underway at the Vitality Stadium against Bournemouth. We have already tipped Villa up to be the top-ranked Midlands side this coming season, and the added quality of Diego Carlos and Boubacar Kamara immediately strengthens them.

Bournemouth’s first-ever Premier League fixture came against Villa, as they were beaten 1-0. However, since then, they have won all three top-flight meetings between the sides. Villa’s record of one win in five opening day fixtures also offers a chance for the Cherries. This could be where the big coupon-buster on opening weekend comes.

Big seasons await for both Leeds United and Wolves this term. It has been a big overturn of players at Elland Road, with influential stars such as Kalvin Phillips and Raphinha both departing. Meanwhile, only the bottom three last season scored more than Wolves, which highlights their dire need for a new striker.

The team from the Black Country has a solid record at Elland Road, as they are unbeaten in their previous four.

However, given that both sides want to start on a positive note, we could see this fixture ending in a draw, just as it did last season.

One of the teams that I am most excited to see this weekend is Tottenham Hotspur. Antonio Conte has built a very strong squad over the summer with the additions of Richarlison, Ivan Perisic, and Yves Bissouma. The Saints are likely happiest that they managed to keep hold of James Ward-Prowse, but they will need to start this campaign stronger than they finished the last.

Southampton has recorded just three wins from their previous 20 away fixtures against Spurs, while Tottenham has picked up wins in their first home game of a new season in six of the previous nine seasons. This looks as close to a home-banker this weekend as any other fixture.

It is a welcome return to the Premier League for Nottingham Forest this term, and they play their first top-flight fixture since 1999 this weekend. Forest has added a lot of quality over the summer, with Dean Henderson and Jesse Lingard among the big names brought in. However, remaining in the top flight will be their main goal.

Newcastle United finally got Sven Botman over the summer, and the Toon’s defense looks much more solid, too, following the arrival of goalkeeper Nick Pope. The Magpies have a solid record against newly promoted sides, as they are unbeaten in eight. However, we could see this being one of the more entertaining games of the weekend, with over 2.5 goals being scored.

The later game on Saturday comes from Goodison Park, as Everton look to put a disastrous 2021-22 campaign behind them. However, confidence among Toffees fans remains low, with Richarlison departing and Dominic Calvert-Lewin expected to miss the first three months of the new season.

It was also a summer of change at Chelsea, with new owners now in place. The huge signings of Raheem Sterling and Kalidou Koulibaly only raise their hopes for a strong campaign. However, Everton has won each of their previous four home games against the Blues, and are unbeaten on the opening day in ten years. The trends certainly point towards Everton, but it’s so hard to look past Chelsea.

Erik ten Hag’s Manchester United open their campaign on Sunday against Brighton. A warm reception will await the new coach, but that could soon turn frosty if there are no signs that they are going to improve on a disappointing campaign last year.

Christian Eriksen and Lisandro Martinez could be among the debut boys for United, who have beaten the Seagulls in six of the seven league meetings between the sides. Brighton has never recorded a victory at Old Trafford, losing on their previous eight visits.

There will be pressure on both Leicester and Brentford to get off to a winning start this weekend. Brentford are expected to struggle this term after losing Christian Eriksen, while the Foxes are the only team in Europe’s top five leagues yet to make a signing.

The Bees lost both home and away against the Foxes last season, with both fixtures being by a 2-1 scoreline. That could mean that there is a value in over 2.5 goals this weekend.

Last season’s champions are the final team to get their campaign underway this weekend. Manchester City have added Erling Haaland to their ranks, but it remains to be seen how strong they remain over the course of the season following the departures of Raheem Sterling and Gabriel Jesus.

The Hammers enjoyed another fine season under David Moyes last term, as they finished in seventh. However, City’s record of ten wins and three draws in the previous 13 meetings could make this one of the easiest games to predict this weekend.