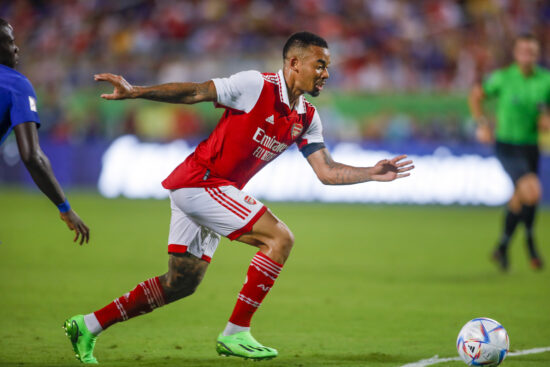 The first game of the English Premier League following the international break couldn’t be better.

North London rivals Arsenal and Tottenham Hotspur will square off at the Emirates Stadium. These two sides have high ambitions, and besides that, the fact that they occupy top places in the standings is something that only spices up the entire situation.

The atmosphere will be wild, that is for sure, and we expect to see similar circumstances on the field.

Jesus and the Forwards Leading the Way

Even though he doesn’t have the impressive stats as Erling Haaland, Gabriel Jesus is one of the best players in the league at the moment. His influence on Arsenal’s performances is the essential thing why the Gunners sit atop of the standings, and we have to say that Arteta hit the jackpot with his signature.

Arsenal has six wins and one defeat in the Premiership. That one failure came against Manchester United on the road, when Arteta’s midfield, particularly Granit Xhaka, failed to show up. It was Arsenal’s sole poor performance since July.

Though, the Gunners are very confident at home, with all three EPL wins this year, in all of them hitting the back of the rival’s net at least twice. All of these games ended with goals on both sides and Over 2.5.

We strongly believe there isn’t a better offensive trio than Kane-Son-Richarlison in the league right now. With all due respect to all other teams and their forward groups. The way these guys transform from defense to offense and the way they create chances is stunning. As time goes by, they will be even better because Richarlison still needs to adjust his style of play with others.

Tottenham is undefeated in the EPL, having five wins and two draws. They are a bit shaky on the road when looking at all the competitions, and the loss in the UEFA Champions League in Lisbon to Sporting, 2-0, showed a few flaws.

As for the efficiency of away games, three in four played during this campaign were with two or three goals, meaning that it was a moderate number of goals.

Arsenal is better in the all-time series, having 79 wins, compared to 61 of the Spurs, with 51 draws.

During the 2021/22 campaign, both teams won at their respective home grounds, Arsenal at the Emirates, 3-1, and the Spurs at Tottenham Stadium, 3-0.

There should be goals on both ends of the field, as these two teams have incredibly gifted attackers and solid but not high-quality defenders.