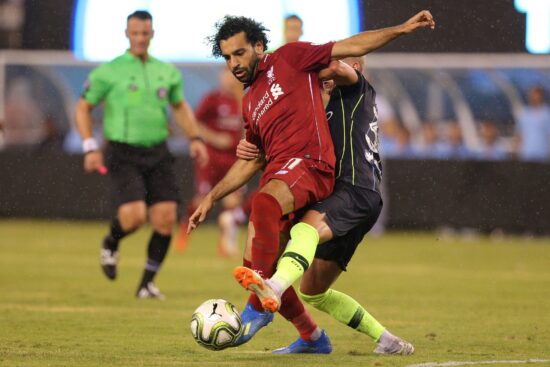 If you can’t decide what Premier League picks to make this weekend, let us try and help you.

Looking ahead to this weekend’s next installment of the Premier League, there will once again be 10 fixtures on offer, including a blockbuster matchup between league leaders Arsenal and title hopefuls Liverpool.

Other exciting matchups include a top-four clash between Brighton and Hove Albion and Antonio Conte’s Tottenham Hotspur before Everton welcomes Manchester United to Goodison Park.

Read on for all you need to know about this weekend’s Premier League action, including gaining access to all of our free soccer picks.

This one is a really tough fixture to try and call.

Both teams are in brilliant form and have just three losses between them.

Expected to be evenly matched through most parts of Saturday’s game, backing the draw may not be such a bad idea but considering how many goals Newcastle United recently put past Fulham, it is going to be safer to cover the double chance.

Leicester City may not have made the best start to the new season but they do have one of the only players to come close to matching Erling Haaland’s ridiculous stats – midfielder James Maddison.

Having picked up their first win of the season after thumping Nottingham Forest 4-0 last weekend, Brendan Rodgers’ Foxes will come into Matchday 10 with a lot higher confidence, and rightly so.

Unlikely to fear Bournemouth, who have been failing to put their opponents away, Leicester City should be able to pick the Cherries off, and considering just how red hot his form is, we wouldn’t be surprised to see Maddison among the goals again.

With 17 goals in just his first 11 matches for Manchester City, there appears to be no stopping Erling Haaland.

The Norweigan is in blistering form and is on course to hoover up all of this season’s individual awards, even at this early stage.

Coming in off the back of an emphatic 6-3 win over rivals Manchester United last weekend, to back anything other than another win for the Citizens with at least one of their goals coming from their new number nine, would make absolutely no sense.

In order to bounce back, the team from the Midlands will need to travel to Stamford Bridge to take on Graham Potter’s Chelsea – and that is not going to be easy.

Understandably the more star-studded team, Chelsea, who are beginning to pick their form up, should have enough about them to get safely over the line in this one.

Brighton and Hove Albion are quickly becoming this season’s surprise package. The south coast side, dubbed the ‘Seagulls’, are now preparing for their next big challenge – taking on Antonio Conte’s Tottenham Hotspur.

Both of these teams have had a great start to the new 2022-23 season and have just two defeats combined, so we’re expecting this one to be a hugely competitive matchup.

Unlikely to roll over easily, especially at home, backing the draw isn’t a bad idea, but to play it slightly safer, we’re going to put our money on both teams to score at least once.

This one should be a great London derby. Both of these teams will be eager to pick up another win with West Ham United looking to make up for a poor start and Fulham desperate to bounce back after being thumped 4-0 by Newcastle United last time out.

Although both teams have looked good going forward, their defenses have been shaky, and after conceding a massive 24 goals combined, it would be fair to back more goals again in this one.

Suffering a damaging 2-1 defeat against Chelsea (which we successfully tipped in our Matchday 9 preview) last weekend, Patrick Vieira is another manager in dire need of a win.

Preparing to face off against Jesse Marsch’s Leeds United, who currently sit 12th in the table on goal difference, the Eagles will know that a win by at least three goals would have the potential to see them leap-frog their Yorkshire opponents.

While we don’t expect the London-based team to net that many against the Whites, we do expect them to breach their opponent’s net at least once. The same can be said for Leeds United as well.

After picking up from the international break right where they left off by thumping rivals Tottenham Hotspur 3-1, Arsenal have proven they’re genuine title contenders.

The Gunners’ fixture this weekend is without a doubt the pick of the bunch, and considering the wealth of talent set to be on display, both for Arsenal and Liverpool, we’re expecting end-to-end action and plenty of goals.

Not only will Manchester United be licking their wounds after suffering a 6-3 thrashing against bitter-rivals Manchester City last weekend, but the Red Devils are also expected to award Casemiro with his first competitive start since moving from Real Madrid earlier this year.

Likely to lineup alongside the likes of Bruno Fernandes and Christian Eriksen, Manchester United should have a lot more stability in the center, and as this one is likely to be decided in the middle of the pitch, it would be fair to expect Erik ten Hag’s Red Devils to control the game.

Not only that, but Given their firepower up top, it’s impossible not to back the 20-time league winners to get back to winning ways.

Starring at the possibility of spending next season back in the Championship, Nottingham Forest, who currently sit rock-bottom of the Premier League, are in desperate need of a win.

However, although they may fancy their chances up against Steven Gerrard’s underwhelming Aston Villa, it is hard to foresee where Forest can win this one.

Villa are the more physical and faster-paced side. Not only that, but with the likes of Leon Bailey and Philippe Coutinho in their squad, they’re also the more technical.

We don’t expect a lot of goals, but we do think Gerrard’s men will have enough about them to take all three points.