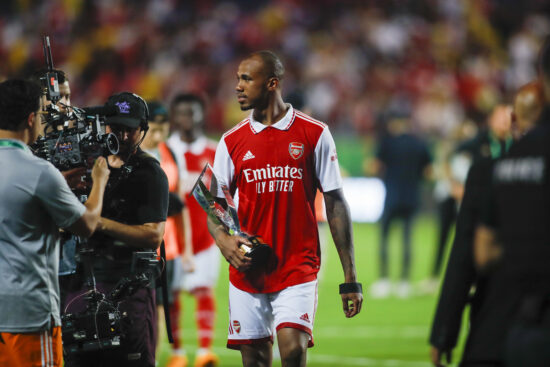 If you’re in search of some Premier League predictions ahead of matchday 4, look no further, Vegas Odds has you covered.

This weekend will see 10 fixtures played across both Saturday and Sunday, with every team in action and looking to pick up some vital points.

Southampton against Manchester United will kick the weekend’s action off before another six games take place on Saturday.

Sunday will see a tasty-looking clash between Wolves and Newcastle United take place in the Midlands before Aston Villa and West Ham United go head-to-head in a bottom-of-the-table clash, and Nottingham Forest welcome early title contenders Tottenham Hotspur to the City Ground.

After losing their opening two matches against Brighton and Hove Albion and Brentford, Manchester United’s season finally started when they beat rivals Liverpool 2-1 on Monday.

The Red Devils will travel to the south coast of England for Saturday’s early kick-off and we expect Erik ten Hag’s men to follow up Monday’s result with another victory.

New signing Casemiro is likely to make his club debut and that will only help the Red Devils’ chances of picking up all three points.

Having lost two games and drawn the other, Frank Lampard’s Everton are in danger of being cast adrift already.

A top performance is the least that is required from the Toffees but it won’t be easy. Thomas Frank’s Brentford are a notoriously tough team to beat but have conceded five goals in their first three matches, and we expect the Bees’ goal to be breached again this weekend, even if they do go on to get the win.

Both of these teams have started really well. They’re both on seven points and sit high up in the table, but something will have to give on Saturday.

While we’re not confident enough to make a Moneyline prediction, we can definitely see both teams having success in front of goal.

Leicester City are in a rut. Having started the season poorly, Brendan Rodgers’ Foxes sit inside the relegation zone with just one point, and unfortunately for the 2015-16 champions, we don’t expect things to improve this weekend.

Chelsea will be licking their wounds after being thumped 3-0 by Leeds United last weekend, so expect to see a much-improved performance from the Londoners.

Liverpool’s season has yet to start. After being beaten 2-1 by Manchester United on Monday, Jurgen Klopp’s Reds sit close to the bottom of the table with just two points from a possible nine.

Similar to Chelsea, Liverpool will be out to right the wrongs from their first three games, and although beating Bournemouth won’t be easy, the Reds should have enough firepower to get a result, even if it is a narrow one.

Crystal Palace appears on course to have another impressive season under manager Patrick Vieira, however, expecting a good result away to champions Manchester City may be a bit too much to ask for the former Arsenal midfielder turned tactician.

Two of the season’s most in-form teams (so far) will go head-to-head at Arsenal’s home stadium.

The Emirates will be rocking as Mikel Arteta’s Gunners look to improve their position at the top of the table. Getting the better of Fulham will require a lot of hard work though. The Cottagers are unbeaten in their first three games, scoring five goals in the process.

Arsenal have the better squad and are blessed when it comes to attacking talent, but we do expect their defense to be tested. This one has the potential to be the fixture that sees the most goals.

Both of these teams are desperate for a win. Aston Villa sit mid-table on three points with Saturday’s opponents rock-bottom of the table on a big fat zero.

It is really tough to call an outright winner but we are confident it will be a cagey affair with goals few and far between.

Wolves’ points tally, which sees them inside the relegation zone with just one point, is not an accurate reflection of how they’re playing.

Unlucky not to have come away with at least a point in their last match against Tottenham Hotspur, we expect Bruno Lage to instruct his side to keep doing what they’re doing and make assurances that the results will come.

However, Newcastle United are in fantastic form and are arguably one of the most exciting teams to watch this season.

Given both sides’ impressive offense (and shakey defenses), we wouldn’t be surprised to see the points shared in this one.

Credit where its due – Nottingham Forest have started their first season back in the Premier League in great fashion.

Winning, drawing and losing in their first three games, Steve Cooper’s Reds are certainly making the most of their return to England’s big time.

However, matched up against Antonio Conte’s Tottenham Hotspur is a nightmare for any team right now.

Conte’s Lilywhites are dark horses for the Premier League title and with a front three consisting of Son Heung-min, Dejan Kulusevski, and club legend Harry Kane, it is really hard to predict anything other than all three points heading back to North London.