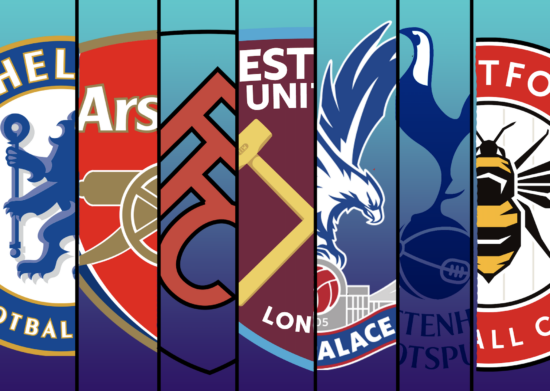 The UK’s most populous city is home to seven Premier League clubs, three of which – Chelsea, Tottenham Hotspur, and Arsenal – have won the English top-flight several times in the past.

Although none of them won the title last season, these teams did do very well. Chelsea finished third, Tottenham fourth, and Arsenal ended the season in the fifth position.

The other London-based clubs also did relatively okay, with West Ham finishing seventh, Crystal Palace 13th, and Brentford 14th. When it comes to Fulham – the seventh London club that we’ll see play in the upcoming Premier League season – this team played in the Championship last season.

Top soccer betting sites don’t think any of the London clubs stand a chance to win the 2022-23 EPL title, but we could see some of them finish at least as high as last season. So which team will finish with a better record than all of its city rivals? Let’s see what Vegas odds are suggesting.

Judging by the Vegas odds available at BetOnline.ag, Tottenham Hotspur is most likely to finish the 2023-23 Premier League season higher in the standings than the other six London clubs. Last year, the Spurs finished a spot below Chelsea, but this time, bookmakers predict they’re going to do better.

The no.1 reason is that this team has spent more money on transfers this summer than any other Premier League club. The Spurs have splashed a total of 115 million pounds or about 140 million US dollars on signings. Was it worth it? Knowing that they brought in players like Richarlison (from Everton), Clement Lenglet (Barcelona), and Yves Bissouma (Brighton), the answer is yes.

What to Expect from Chelsea?

Oddsmakers think Chelsea has a good chance to have a successful season, but we call for caution. It’s just that this club has been through a lot recently. The Blues have a new owner, and their roster looks different from the one from the last season.

Romelu Lukaku has returned to Inter Milan and Saul is back in Atletico Madrid following the end of their loan deals. Further, Antonio Rudiger and Andreas Christensen have moved to Spain on free transfers (to Real Madrid and Barcelona, respectively). On top of everything, there are some rumors that Timo Werner is looking for a way out. Reportedly, he wants to be gone by the end of the transfer window.

Chelsea did make a couple of signings, most notably Kalidou Koulibaly (from Napoli) and Raheem Sterling (Manchester City), but they will have to do more if they want to finish as high as last season.

Priced at +500, Arsenal looks like a fantastic bet. Not only are the betting odds attractive, but this bet is also very likely to win. Last season, the Gunners finished in the #5 position even though their squad was made up of youngsters with not much experience.

Those guys are a year older now, with way more confidence than before. For instance, Arsenal’s top-scorer last season – Bukayo Saka – is turning 21 in September. Further, their second-best scorer, Emile Smith-Rowe, turns 22 in three days.

Plus, Mikel Arteta will have a few great players extra at his disposal in 2022-23. Gabriel Jesus and Oleg Zinchenko have arrived from Manchester City on big-money transfers, while there are also several players coming back to London after loan spells. Among those are Lucas Torreira (played for Fiorentina last season), Ainsley Maitland-Niles (AS Roma), Pablo Mari (Udinese), and Hector Bellerin (Real Betis).