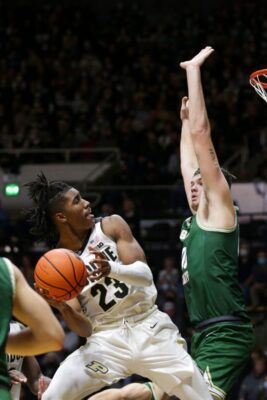 In the second game of the Cheez-It Hall of Fame Tip-Off, we have a battle between two unbeaten teams as the Purdue Boilermakers take on the North Carolina Tar Heels. Neither team has truly faced an opponent who is quite up to the top 64 standards, but nonetheless, they have beaten the teams on their schedule, and now they both get their first true test of the season.

Purdue Looks to Stay Consistent in Their Scoring

The Purdue Boilermakers embark on their fourth game of the season when they take on the North Carolina Tar Heels this afternoon. The Boilermakers have scored at least 92 points in their first three games of the season. Yes, those opponents weren’t the Tar Heels, but as the old saying goes, you can only beat who you play on your schedule.

The North Carolina Tar Heels have played in a few close games this season against opponents who have no business being in contention with the Tar Heels. This can be the first of many games where the Tar Heels figure out their true identity this season.