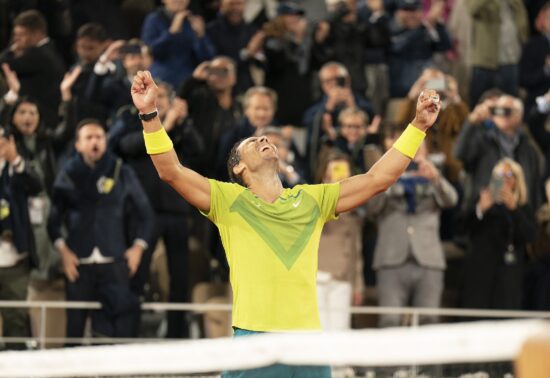 The king is back! Even though he was only the #3 favorite to win the 2022 French Open, Rafael Nadal has made it to the semifinal, knocking out the main favorite (Novak Djokovic) along the way. His next stop is the semifinal duel with Alexander Zverev.

The match is played Friday, June 3, the day when Nadal is turning 36. Although he’s not getting any younger, Nadal’s been playing amazing tennis this year. So far in 2022, his record is 28-3 and oddsmakers think he’s going to add another win to the list.

Nadal’s Vegas odds make him a strong favorite in the French Open semifinal, but his opponent mustn’t be underestimated. After all, Zverev was the one to beat Carlos Alcaraz on Tuesday, the man who was the #2 favorite to win the title before the tournament started.

With 21 Grand Slam trophies in his cupboard, Nadal is the most successful player in the history of men’s tennis. He’s also the absolute GOAT when it comes to the French Open with 13 titles won so far. Top tennis bookmakers think he’ll add a 14th to his collection this year.

Right now, he’s the top favorite to win the 2022 French Open with the Vegas odds of -227. However, that wasn’t always the case. In fact, just before the start of the tournament, he was priced at +400 at some betting sites.

If you’re wondering why that was the case, it’s because Nadal had struggled with injuries before coming to Paris. After going 20-0 at the start of 2022, he suffered a rib injury in the semifinal of the Indian Wells in March. The injury didn’t stop him from playing in the final, but it did prevent him from prolonging his winless run – Nadal ended up losing to Taylor Fritz in the title match.

To deal with the injury, the Spaniard had to stay off the court for nearly two months, making his comeback in May. He entered the 2022 Madrid Open with high ambitions only to get knocked out in Round 3.

A similar thing happened a week later when his Rome Open journey ended after the second match. The tournament also saw Nadal picking up another injury. Reportedly he was playing through serious pain after injuring his foot in the Italian capital.

There were doubts about whether he was going to be fit enough to play at Roland Garros, but he proved doubters wrong. In the semifinal against Djokovic, Rafa was a +175 underdog, but he ended up beating the world no.1.

Does Zverev Stand Any Chance?

Although Alexander Zverev is one of the best NextGen players, oddsmakers don’t think he can do much on Friday. There are several reasons for that, starting with the fact that his overall record against Nadal is 3-6. Further, when it comes to their head-to-head duels played on the clay court, Zverev is just 1-3.

On the bright side for Zverev, he’s been brilliant since coming to the French capital. So far, he’s dropped just two sets, one of which he lost against favored Alcaraz in the quarterfinal. Speaking of the devil, Alcaraz entered that match as a -455 favorite, but Zverev absolutely dominated him from the very start.

The win has certainly given Zverev a massive confidence boost. The only question is whether he’s going to be able to make use of it on Friday?

He’s taking on one of the greatest players in the history of the sport, whose strongest weapon is playing on the clay court. Plus, Nadal will have the fans on his side – after all, it’s his birthday this Friday.

It’s no surprise that Nadal is seen as a major favorite against Zverev, however, he probably isn’t going to have a field day on Friday. The thing is that even though he’s feeling good about himself after being his main rival for the tennis GOAT status, he might be jaded right now.

The match with Djokovic lasted for four hours and 12 minutes, while two days before that, he stayed on the court eleven minutes longer (against Felix Auger-Aliassime).

That said, we probably aren’t going to see Nadal destroy his opponent on Friday, which is why our top pick is “Zverev +5.5 Games”.