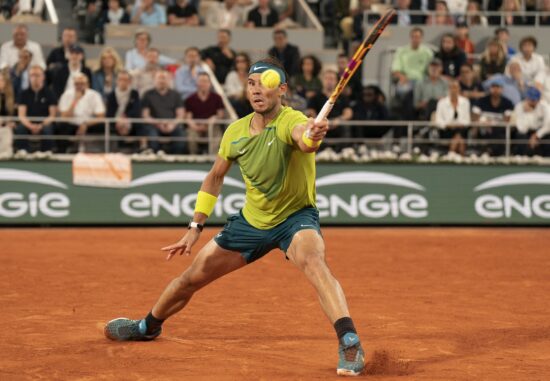 Rafael Nadal is just one step away from winning his 14th French Open title. The only obstacle on his way to the trophy is Casper Ruud, a 23-year-old who’s playing his first Grand Slam final on Sunday. If you take a look at Vegas odds, you’ll see that Nadal is a huge favorite to win.

Priced at -556, the King of Clay is expected to have an easy job on the central court of Stade Roland Garros in Paris. In fact, it seems that the real question in this matchup isn’t who’s going to win, but whether we’ll see Ruud put on much of a fight.

Rafael Nadal Is Favored for a Reason

The 36-year-old Spanish superstar is the player with the most Grand Slam titles won. Right now, he has 21 titles in his collection, as well as a great chance to add another one on Sunday. Most of those Grand Slam wins happened in France – the French Open is his favorite tournament, which he’s won 13 times so far.

Playing fantastic tennis on the clay courts of Roland Garros is why the media dubbed him the King of Clay. On this surface, he’s 9-2 this year. His record could’ve been even better, but he had some problems with injuries that caused him to underperform in Madrid and Rome in early May.

However, since coming to Paris, he’s been sensational. His best performance thus far is the one against the world no.1 Novak Djokovic in the quarterfinal. Despite entering the match as an underdog, Nadal went on to win 3-1.

In the semifinal, Nadal went past Alexander Zverev, who had to retire due to an ankle injury in the second set.

Can Casper Ruud Cause a Sensation?

Ruud is the highest-ranked Norwegian player in history. Currently, he’s eight in the ATP Rankings but he’s going to move up a few spots after the French Open. This is because just by qualifying for the final, he’s secured 1,200 ranking points.

That said, one can say that Ruud has already achieved a lot in this tournament. Of course, he’d love to win on Sunday, but he probably understands that his chances are very slim.

Ruud’s road to the French Open final was relatively easy. In the five matches he played, Ruud didn’t face a Top 10-ranked player. In fact, his highest-ranked opponent was Hubert Hurkacz (no.13).

Rafael Nadal is going to win this match, there’s no doubt about it. Not only is he one of the greatest players in the history of the sport, but the Spaniard has been playing top tennis this year. Further, the 36-year-old just loves playing at Roland Garros and the Paris crowd loves him.

We know Nadal is going to win but so do tennis bookmakers, who are giving extremely short odds on the Spanish legend. This is why we’re going to stay away from the match-winner market and focus our Nadal vs Ruud pick on the spread (a.k.a. handicap).