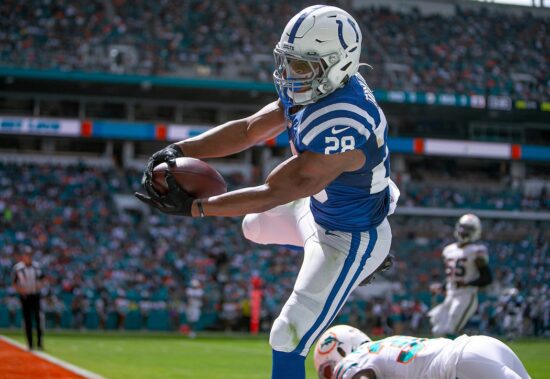 After triumphing in Arizona last weekend, the Colts have suddenly increased the prospects for entering the playoffs and winning the AFC South. Though, they will appear in this one without Carson Wentz, who is on the COVID-19 list.

On the other side, despite all the doubts, the Raiders are still in the mix for the postseason. And Sunday’s event is probably the most important of the year for them. Not for them, but for the Colts too.

Las Vegas posted the last two wins mostly because of their defensive team. At first, the Raiders defeated the Cleveland Browns on the road, 16-14, and after that, the Denver Broncos at home, 17-13. As you can see, the defense did its part of the job. Who didn’t? Derek Carr.

Against the Browns, the Raiders QB had two turnovers, one pick, and one lost fumble. The game against the Broncos saw the same, Carr fumbled the ball and got intercepted again while throwing for 201 yards and one touchdown.

Truth be told, if it weren’t for Josh Jacobs, who ran for 129 yards on 27 carries, we firmly doubt that the Raiders would end up on the winning side. One very important update is that Darren Waller should be ready for the event.

Colts Rise the Form in the Best Possible Moment

In our opinion, the Colts and the Rams have the most room for improvement of all teams right now, and these two sides have been going up steadily in the last few weeks. Frank Reich’s unit won three games in a row, six in the previous seven.

After defeating the Pats, many believed that the franchise from Indiana reached its peak, but taking down the Cardinals in Arizona is something that proved them wrong.

Carson Wentz was playing good football, with 225 passing yards for two touchdowns. He was without fumbles or turnovers, handing the rhythm to the Colts’ attack, but unfortunately, he won’t be available for Reich in this event. One of the top MVP contenders, Jonathan Taylor, had 108 rushing yards, and Michael Pittman Jr. 82 through the air.

The last game took place in Las Vegas last December, and the guests from Indianapolis posted a victory, 44-27. This was the only head-to-head meeting since the Raiders moved from Oakland to Las Vegas.

This clash will be fun to watch because both sides play interesting and exciting football. The winner will be determined on the ground, that is, whichever side establishes its running game better. At this particular point, we assume that the Colts will be that team, not only because of Taylor but also because of better overall versatility on the offensive side of the football.