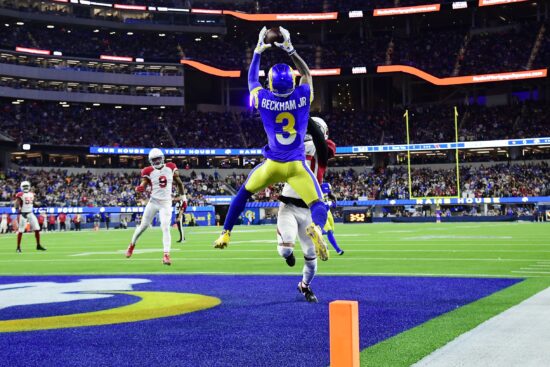 After demolishing the Arizona Cardinals in the Wild Card Round, the Los Angeles Rams are traveling to Florida to take on the reigning NFL champs, the Tampa Bay Buccaneers. The two meet in the NFL Divisional Playoffs on Sunday afternoon, which is going to be their second clash of the season.

The Rams won their first duel 34-24, which was played in LA. This time, the two foes are locking horns at Raymond James Stadium in Tampa and the oddsmakers think the hosts are more likely to win.

After beating the Cards in the Wild Card game, the Rams now have a chance to get to only their second NFC Championship game since moving back to Los Angeles from St. Louis. Getting there, however, isn’t going to be easy as they need to beat reigning Super Bowl champions to do so.

On the bright side for the Rams is that they haven’t had such a strong roster in a while. Defensively, they’re strong as always. With the three-time DPOY Aaron Donald, they seem capable of stopping literally any offense in the league.

The best thing is that Donald is just one in a long list of defensive superstars on the Rams’ roster. They also have such linebackers as Von Miller and Leonard Floyd, as well as a cornerback maestro, Jalen Ramsey, and many others.

And in the 2021-22 season, they also have some fantastic players in their offensive team. Matt Stafford is the best example. The former Detroit Lions quarterback has been sensational since making California his new home at the start of the season. We saw him throwing for a total of 4,886 yards in the regular season, recording 41 touchdown passes.

Stafford’s favorite pass target has been receiver Cooper Kupp, who finished the regular season as the leader in receptions (145) and receiving touchdowns (16).

Should the Bucs Worry About their Rushing Game?

Tom Brady is going to be the man in the spotlight in the Divisional Round game. This goes especially because his team might be forced to focus on the passing game only. The reason is that two of the Bucs’ best ball rushers remain questionable.

The men in question are Leonard Fournette and Ronald Jones, who had 12 rushing TDs between them in the regular season, gaining 812 and 428 yards respectively. The two, however, have been out of action for a while, but the Bucs had no problems defeating their opponents.

They did well against the Eagles, but can they do well against the Rams? As a reminder, the Rams defense allowed only 100.8 rushing yards per game in the regular season (the 5th best in the league).

Can the Rams defense stop Tom Brady? If they manage to do it, then they should have no problems advancing to the NFC Championship Game.

Still, stopping the NFL GOAT candidate is much easier said than done, meaning that we’re in for a lot of excitement on Sunday. No one should be surprised if the game went to overtime, with both teams scoring plenty of points.