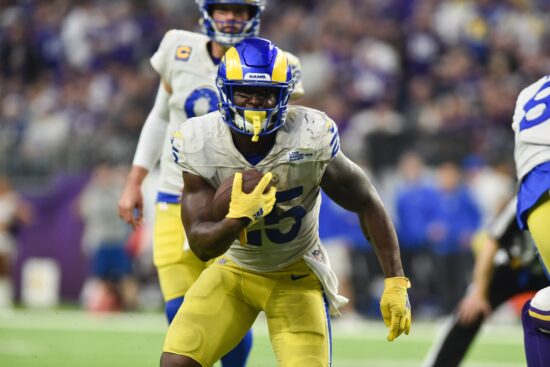 After winning all four games in December, the Los Angeles Rams have secured a place in the postseason. Not only that, but they’ve also climbed to the top position of the NFC West. They want to stay there until the end of the regular season, but for that, they need to continue winning. The reason is that the Arizona Cardinals are breathing by their necks with just one win fewer.

Winning the Week 17 game is a must for the Rams if they wish to win the division. However, their opponents are also in desperation mode. The Baltimore Ravens need to win on Sunday to stay in the race for the postseason. After losing four games in December, they cannot risk losing another one.

The good news for the Ravens is that they’re playing in front of their own fans at M&T Bank Stadium. The bad news is that the Rams just seem superior at the minute. This goes especially if the Ravens starting quarterback Lamar Jackson doesn’t recover by Sunday.

December 12 is the date when Lamar Jackson was on the field the last time. It was in the Week 14 game against the Cleveland Browns, in which he suffered an ankle injury after playing for only a few minutes. With him out, the Ravens ended up losing that game. The same then happened in their next two games.

Truth be told, they weren’t too great even when he was injury-free. With him in the QB position, the Ravens had a 7-4 record. In those 11 games, the 2019 MVP threw for a total of 2,882 yards and 16 touchdowns, while 13 of his throws were intercepted.

He hasn’t been great in 2021 but if he returns in Week 17, it’s going to give his teammates a massive morale boost. Still, his input isn’t going to mean much unless the Ravens fix their #1 issue – their defense.

The Ravens defensive team has been their Achilles’ heel over the last couple of weeks. They conceded a total of 114 points in the four games they played (and lost) this month.

The Rams are Very Close to Securing the NFC West Title

If the 2021 season ended today, the Rams would be crowned the NFC West champions. It’s because their record is 11-4 ahead of Week 17, while their main divisional rivals have a 10-5 record. The trouble is that if both teams finish with the same record, the Cards will get the higher spot in the rankings.

This is due to the divisional record tiebreaker rules. The two split the series 1-1, but the Cards have a better record against the other teams from the NFC West. Their record versus divisional opponents is 4-1, while the Rams are 3-2 in the division.

What all this means is that in order to win the division, the Rams would probably need to beat the Ravens on Sunday. That’s exactly what’s on their agenda. They’re coming to Baltimore after four impressive wins against the following teams:

The Rams’ defense was great in those games, as usual. However, their offense really switched to the top gear in some of those games. Their QB Matt Stafford, for example, threw for three touchdowns and zero interceptions in the first two games of the month.

In the other two games, the Rams’ rushing game was superb, while we also saw their special team doing wonders on the field.

Both teams will be super motivated on Sunday, there’s no doubt about that. However, the Rams are a better team, not to mention that their form is much, much better than Ravens’.