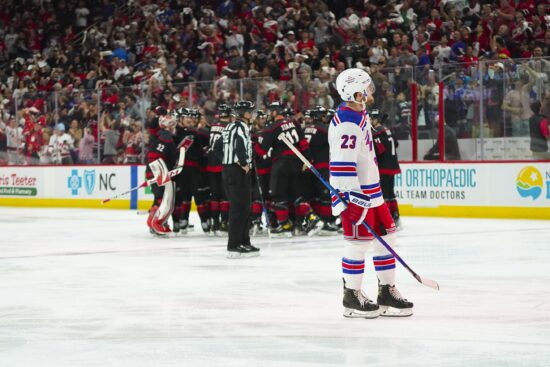 The Stanley Cup playoffs are heating up, and the second-round tie between the New York Rangers and Carolina Hurricanes looks set to be an engaging match-up. It is advantage to the Carolina Hurricanes after game one, as they took an early series lead with a 2-1 victory in overtime on Wednesday evening.

Hurricanes Hoping To Blow Rangers Away

It was an excellent start to this second-round matchup in the Stanley Cup for the Carolina Hurricanes, as they sealed a dramatic overtime win at PNC Arena on Wednesday evening. However, their attention will swiftly turn to the second matchup between the two sides, which will take place on Friday evening.

The Hurricanes will once again have home advantage on their side, before the series moves to New York over the weekend. Carolina has been excellent at home throughout the season, as they boasted a record of 29-8-4 at PNC Arena throughout the regular campaign. That strong record has continued in the playoffs, as they have now won all five games that they have played in Carolina.

But, game one was a dramatic affair for the Hurricanes, as they needed a goal in the third period to force overtime. Sebastian Aho and Ian Cole were the heroes in the opening win. But, they will need to perform better in the second fixture between the sides.

It will be a big game in North Carolina for the New York Rangers on Friday evening, as they look to level the series before the tie moves to Madison Square Garden over the weekend. The Rangers are no strangers to big wins on the road in the playoffs this season, as they beat the Pittsburgh Penguins away from home in game six to remain in contention in the previous round.

The Rangers almost played the perfect game in game one of the series, as they nearly held on to a 1-0 win. Their goal was scored in the opening period by Filip Chytil. However, it’s imperative that they respond to the setback earlier in the week in game two.