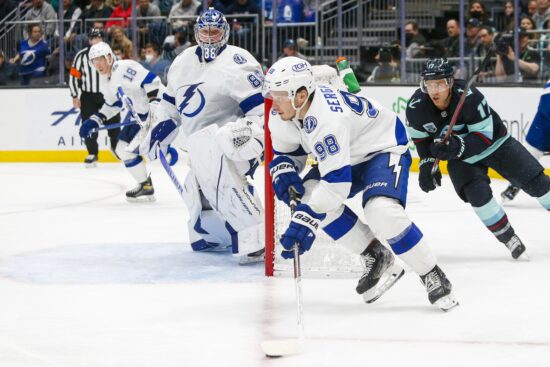 The New York Rangers travel to Florida this weekend to take on the reigning NHL champions, the Tampa Bay Lightning. The NY team is still without a loss to the Stanley Cup winner in the 2021-22 season with one win in regulation and one win after penalties. This Saturday, however, Vegas odds are leaning in Tampa’s favor.

There are at least two good reasons why bookmakers see the Lightning as the favorite. One is that this team is coming off two wins away from home. The other reason is that the Rangers vs Lightning game is played at Tampa’s Amalie Arena. That’s where this team has a 67.85%-win percentage. Meanwhile, the Rangers are 56.25% on the road.

Tampa Aiming at the #1 Spot in the Atlantic Division

Ahead of the Rangers vs Lightning, Tampa has 84 points (39-6-15), which puts this team in the #2 place in the Atlantic Division. The Toronto Maple Leafs and Boston Bruins are behind, and both of them have a chance to leapfrog the Lightning in the standings.

The good news is that apart from those two, no other Atlantic team has a reasonable chance to take Tampa’s position, meaning that it’s almost certain this team will make the playoffs. The only question is from which position?

The Lightning have a good chance to get to the top if they continue playing good hockey. That spot is currently occupied by the Florida Panthers, whom Tampa will play against near the end of the regular season.

That said, these guys sure won’t be lacking any motivation in the coming weeks, but do they have the skill set necessary to beat such strong opponents? The fact that Tampa is the winner of the 2021 Stanley Cup tells everything about this team’s quality. The best thing is that all of Tampa’s players are 100% fit at the moment.

What’s Going on With Rangers Defense?

With a 38-5-18 record (81 points), the New York Rangers are safe in the Top 4 of the Metropolitan Division. They have enough points not to worry much about making the playoffs. The reason behind their success this season is their defense.

This team has conceded only 159 goals so far (61 games), which makes their defensive average (2.60) the second-best in the Eastern Conference. Unfortunately, they haven’t been doing too great at the back since the start of March.

Sure, in their last game, the Rangers’ offense failed – they lost 2-1 to the New York Islanders – but before that, we saw them concede significantly more goals than usual. In fact, in four of the eight games played this month, the Islanders allowed four or more goals.

This is going to be a close one. Both teams have fantastic skaters on the roster, although Tampa’s are slightly better in the offense. New York, on the other hand, is great at defending, even though we did see the Rangers concede a lot of goals this month. That said, a win for the Lightning seems plausible, although it could happen after a tie in regulation.