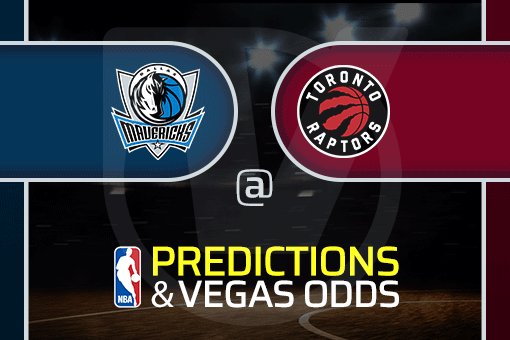 Looking for the latest Raps vs Mavs prediction? Look no further Vegas Odds has you covered.

Watch the Mavs and Raps battle it out as the number ten team in the west takes on the ninth-place team in the eastern conference.

The Raptors are 6-2 at home this season while the Mavs are 1-5 on the road this season.

Toronto is 10th in the league in opponents’ ppg giving up just 110ppg.

Dallas on the other hand gives up 106 ppg to opponents on the season, good for 1st in the association.

This is a matchup between one of the league’s top five players and a very depleted Raptors squad.

Mavericks star Luka Doncic has been on a tear as of late. Playing some of the best basketball in his young NBA career. Doncic is averaging 34 ppg this season. Putting up 42 points with 8 rebounds and 9 assists in his last game versus Boston.

On the other hand, the Raptors have been short-handed this season without star forward Pascal Siakam and Scottie Barnes. Fred VanVleet has been shouldering the load early in the season but now he is out too.

These two teams play with some of the slowest paces in the association. Dallas is 30th in pace while the Raptors are 26th in pace.

Expect this matchup to be lower-scoring due to the pace.

The key to deciding a winner in this game will be Toronto’s ability to stop Luka. But… no one has been able to do that this season.