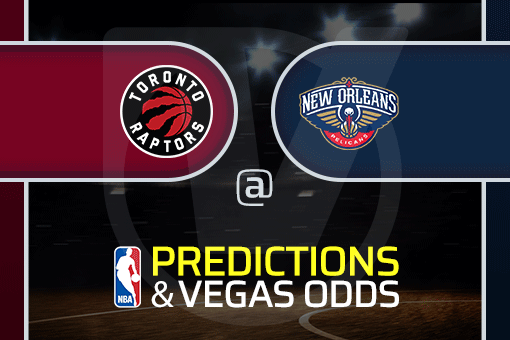 Looking for the latest Raptors vs Pelicans prediction? Look no further, because Vegas Odds has you covered.

Watch the Raptors and Pelicans battle it out as these two young teams looking to assert themselves early in the season.

The Raptors are 11-9 this season coming into Wednesday night’s matchup with the Pelicans. Averaging 111 points per contest good for 15th in the NBA.

New Orleans on the other hand is also 12-8 this season scoring 117 ppg making them the fourth-highest-scoring team in the association.

The Raptors have been without many key players of late; Having to play without Pascal Siakam, and Scottie Barnes.

Barnes and Siakam account for forty of the Raptor’s points a night. Thankfully the Raps got Siakam back last game.

Other players have had to step up in their absence as of late. Players such as O.G. Anunoby and Fred VanVleet both scored 26 points Saturday night against Dallas.

New Orleans is 7-3 at home this season while the Raptors are 3-7 on the road.

The Raptors are 10th in the league in opponents’ ppg giving up just 110 ppg.

The Pelicans on the other hand give up 111 ppg to opponents on the season, good for 12th in the association.

The Raptors have been riddled with injuries this season. Most nights Toronto has had to play with a tight 8-9 man rotation. Which is something you do not see much this early in the season.

The Pelicans on the other hand are looking good early in the season. Making several trades in recent seasons GM David Griffin has put together a solid team that is coming on strong and looking to make a deep playoff run this season.

These two teams play well on the defensive side of the ball and play at a high pace. Expect this to be a higher-scoring game as the Raptors have star forward Pascal Siakam back.

Expect this matchup to go to script but with these teams playing at a high pace scores could climb if either team gets hot from three.

The betting line is sitting at 225-230 for total points in this contest. The average total points between the two teams show that it should be in the range of 228 total points. I would be inclined to take the over.