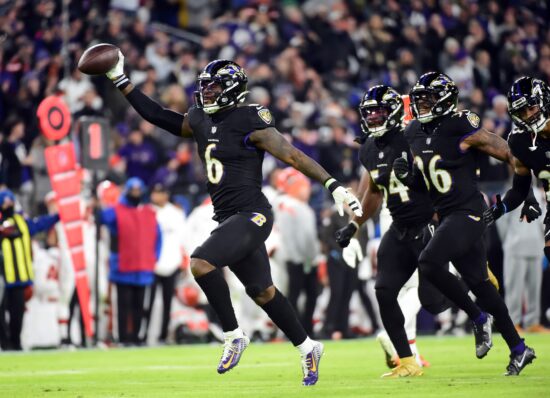 The Baltimore Ravens are flying high once again – they’re the best team in the AFC, with a record of 8-3. Does this mean they’ve already secured a spot in the playoffs? Not necessarily, but they can get one step closer by winning the Week 13 game against their divisional rivals, the Pittsburg Steelers.

Speaking of the playoffs, the Steelers too have a chance to get there. However, their chance is very slim and will get even slimmer if they lose on Sunday.

The chances are that such a scenario will play out, at least judging by the Vegas odds released by top NFL sportsbooks. All of them see Baltimore as a major favorite.

What’s Going to With Lamar Jackson?

The Ravens won their previous two games, thus ending their relatively poor streak of two losses and one overtime win. Still, despite returning to their winning ways, they haven’t been too dominant. In fact, in both of their previous games, they failed to cover the spread.

The reason behind this is that their offense hasn’t been playing too great. Evidence of this is that the Ravens’ scoring tally is 263 in 11 games. That accounts for 23.90 points per game, which makes them the 15th-best team in the league. What’s even worse is that their average in their previous five games is just 18.6 points.

So, what’s going on? Well, when the offense is rusty, it’s almost always because of the quarterback. Baltimore’s QB Lamar Jackson might already be a franchise legend, but his performances in the last couple of weeks have been below-par.

The Week 12 game against the Cleveland Browns was his worst of the season. He threw 20/32 for 165 yards and one touchdown. However, we also saw four of his passes being intercepted. Nevertheless, his team still managed to grab a win.

It’s all because of their superb defense. Although their total is 240 points conceded, they have been playing great defensively in recent weeks. In fact, in their previous three games, the Ravens conceded only 45 points.

A Glimmer of Hope for Pittsburgh

The Steelers are 5-5-1 on the season, competing in the AFC North, together with the Ravens, Bengals, and Browns. All of these teams have won more games than them. Still, they do have a chance to grab a Wild Card berth, but for that to happen, they need to do well in the remainder of the season.

The bad news is that their schedule looks really, really tough. Here are the games they’ll have to play before the end of the regular season:

They surely aren’t going to raise a white flag straight away, but deep in their subconscious mind, they realize the playoff race is over for them. On top of that, their recent run isn’t filling them with confidence. The thing is that the Steelers are without a win since beating the Chicago Bears 29-27 in Week 9.

Since then, we saw them playing a tie with the Detroit Lions and losing to the Los Angeles Clippers and Cincinnati Bengals.

Lamar Jackson is bound to do better than last week, which could mean a disaster for the Steelers’ defense. Even if he doesn’t do well, the Ravens should still be able to get a win. Basically, it’s up to Jackson whether the Ravens will get a blowout win or a modest one.