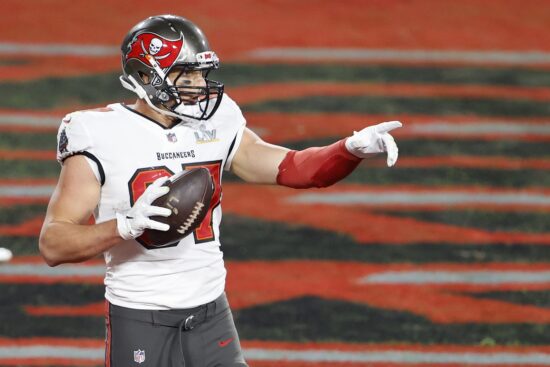 One of the best, if not the best tight end in the history of the NFL, Rob Gronkowski, decided to retire for the second time. He announced the news yesterday via his Instagram profile.

But, many believe that this is just a temporary walk-off for Gronk.

The bookmakers have already set the odds for Gronkowski’s comeback from retirement this season. And it appears they favor Gronk’s return, which is currently priced at -130. On the other side, him skipping the entire 2022 campaign is at +100.

One of the reasons for this is his agent’s statement. Drew Rosenhaus stated that “he wouldn’t be surprised” if Brady contacts Gronk during the season and that the 33-year-old decides to return. After all, we saw that already once in the past.

Since coming to the NFL as a second-round pick out of Arizona, Gronk has become the best tight end in the league, setting numerous records and winning four Super Bowl rings, three with the New England Patriots and one with the Tampa Bay Buccaneers.

Even though being injured frequently, Gronkowski’s productivity when on the court has always been at the highest possible level. Besides that, he was the main target for Brady in all of the clutch situations, and Tom’s legacy was largely built on Gronk’s back.

The Buccaneers were +700 to win the title and were the second-biggest favorite to take the Super Bowl. With Gronk’s departure, some of the bookmakers minimally lowered their chances pricing them at +750, but in general, there hadn’t been some major shift in that area for the moment.

Brady will have a very respectable receiving core at his disposal, with Chris Godwin and Mike Evans leading the way. The first is rehabbing his knee following a season-ending injury last year, and according to sources from within the team, is ahead of the schedule.

Russell Gage, who arrived from Atlanta Falcons, can be one very useful addition, and many believe that he will be even sharper with Brady next to him.

As for the tight end position, the No.1 spot is now Cameron Brate. He’s been with the Bucs for the last eight years and didn’t play for any other team since they drafted him. In 2021, Brate played 17 games having 245 receiving yards and four touchdowns.

Also, Brady will have two rookies at his disposal, Cade Otton from Washington, the fourth-rounder, and a sixth-rounder, Ko Kieft, from Minnesota. Though, we might expect to see them adding one big name during the summer.