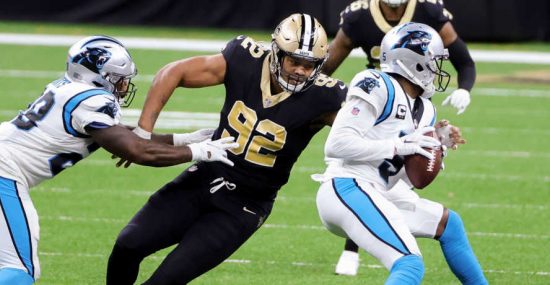 The Saints travel to Chicago in Week 8 to take on the Bears on Sunday afternoon. The team from New Orleans is coming into this game expected to win, with NFL sportsbooks giving the Saints the role of the -4.5-points favorite. If they win it, it’s going to be their sixth straight win against the Bears in a series that started back in 2011.

Saints’ Winning Streak Against the Bears

Saints and Bears met on five occasions in the last decade, each of which saw the New Orleans franchise winning. The last time the Bears won was in 2008, when the final score was 27-24 in overtime. The most recent Saints vs. Bears meeting happened in 2019, when the score was 36-25 in the Saints’ favor.

What’s interesting about that game is that Drew Brees was not involved. Due to an injury, he had to sit it out, with Teddy Bridgewater stepping in as his replacement. The current Panthers’ QB was fantastic in that game, throwing for 281 yards and two touchdowns. The Bears QB in that game was Mitchell Trubisky, who has since lost the starting place to Nick Foles.

One of the strongest weapons of the Bears in 2020 NFL has been their defense. The fact that opposing quarterbacks have been falling by 20.3 points on average when playing against the Bears is something that needs to worry the Saints. Of course, with Brees playing the way he’s been playing so far, they shouldn’t be too concerned.

The thing is that Brees has been brilliant this season, with a passer rating of 105.8. So, even if his output did drop due to Chicago’s great defending, he’d still get 85.5 on Sunday. And that’s higher than Nick Foles’ 77.6 rating.

Even though the quarterback is the most important player in every NFL team, other players also need to perform well in order to get a win. That’s exactly what’s been going on with the Saints lately. The Bears? Not so much. Plus, they got some injuries in the offense, which is guaranteed to make it even more difficult for Foles.

In only one game this season did the Bears concede more than 25 points. The last time they conceded more than 30 was in October 2019. Guess which team beat them in that game? The New Orleans Saints!

Obviously, the Saints love playing against the Bears, and considering that their recent form has been on the rise, it’s fair to expect them to grab another win. Whether they can cover the 4.5-point spread remains a big question, especially knowing that their recent couple of games were very entertaining until the very end.