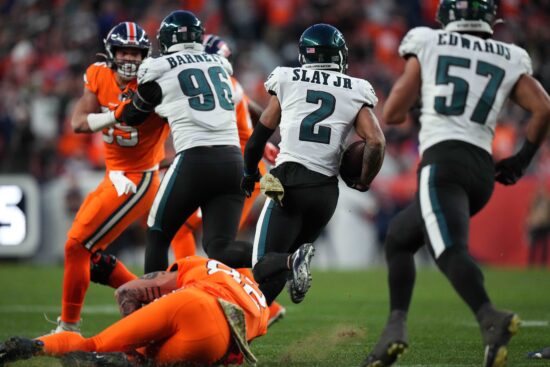 The New Orleans Saints are traveling to the City of Brotherly Love this Sunday to try and end their two-game losing streak. To do that, they need to beat the Philadelphia Eagles at Lincoln Financial Field, which is something they haven’t done since 2014.

On the other hand, the Eagles are without a win at Linc this year. They lost all four home games they played in the 2021 NFL season, as well as two pre-season games and even the Week 17 game of the 2020 season, which took place in early January.

Can they put an end to the dreadful series? Online sportsbooks believe they can. Vegas odds show that they think of the Eagles as the favorite to beat the Saints. Keep reading this preview to see if they’re right to think so.

The Eagles are 4-6 this season, which puts them in second place in the NFC East, behind the Dallas Cowboys who are 7-2. Philadelphia probably isn’t going to be able to win the division, but the Eagles still have a chance to grab a Wild Card berth.

They’re currently tenth in the NFC rankings, but that could easily change. Their schedule for the remainder of the season isn’t too difficult. Actually, after the game with the Saints, they get to play against the two NY teams – the Giants and the Jets.

It’s very likely that the Eagles are planning to win both of those games. The best thing is that they then have a bye, which should give them enough time to prepare for the remaining four games.

Another good news for Philly fans is that their players looked great last weekend when they defeated the Broncos. The Eagles won 30-13, allowing the opponents to score only one touchdown.

That wasn’t the first time their defense put on a fantastic show. Two games earlier, they held the Detroit Lions to only six points.

The Eagles’ defense has a good opportunity to do well once again. In Week 11, they’re locking horns with the undermanned Saints’ offense.

Their starting quarterback Jameis Winston is out for the season. He suffered an ACL injury in Week 8, after which, Taysom Hill got appointed the Saints’ starting signal-caller. Unfortunately for them, it seems that he too will have to sit out the Week 11 game.

According to coach Sean Payton, Hill suffered an injury last Sunday against the Titans. Even if he makes it to the team, he might not play at his full potential.

More bad news for the Saints is that running back Alvin Kamara remains doubtful. Due to a knee injury, he had to skip the Tennessee game. On the bright side, the Saints do have a pretty good RB to cover for him – Mark Ingram.

The Eagles have a perfect opportunity to grab another win, thus getting closer to making their playoff dream come true. They have the will, the manpower, and the fan support to achieve that in Week 11.

NFL Picks This Week for Saints at Eagles: