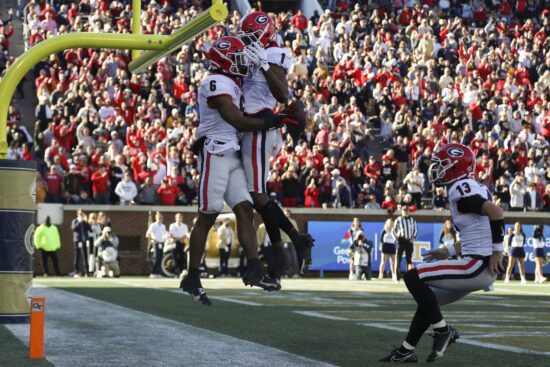 The matchup that every SEC, and college football fan has been waiting to see, the Georgia Bulldogs against the Alabama Crimson Tide for the SEC Championship. The Crimson Tide needs a victory in this game for a chance at a National Championship, and while Georgia is most likely in the final four regardless, a win to end the losing streak would be great for morale.

Not only is Georiga the number one team in the Nation, but they have also completed dominated their opponents to earn that top spot. The Bulldogs have posted a 12-0 record but only have an 8-4 record against the spread this season. Look for the Bulldogs to come out fast and furious on Satruday.

The Georgia Bulldogs’ offense has been averaging 40.7 points per game on 442.3 total yards per game. Those 442.3 total yards break down to 240.3 passing yards and 202.1 rushing yards per game. The number one team in the Nation is led by their senior quarterback, Stetson Bennett. Bennett has completed 119 of 183 pass attempts for 1,985 yards while throwing twenty-one touchdowns with just five interceptions. To complement the Georiga passing attack, the Bulldogs turn to their junior running back, Zamir White. White has rushed for 691 yards on 128 attempts while finding the endzone ten times.

On the defensive side of the ball is where the Bulldogs truly shine. The Georgia defense has been giving up less than a touchdown per game at 6.9 points per game on 230.4 total yards per game. Those 230.4 total yards break down to 151.5 passing yards and just 78.9 rushing yards per game. The Bulldogs also know how to put pressure on opposing quarterbacks, forcing forty-one sacks and twelve interceptions.

How Can Alabama Figure Out the Georgia Defense?

The Alabama Crimson Tide is coming off a tough battle against Arkansas, where they needed four overtimes to secure the victory. Despite getting the victory last week, it wasn’t pretty and if the Crimson Tide are looking to knock off Georgia, they are going to have to play a much cleaner game.

The Alabama Crimson Tide offense is averaging 42.3 points per game on 492.2 total yards per game. Those 492.2 total yards break down to 341.8 passing yards and 150.3 rushing yards. The Crimson Tide offense is led by their Heisman Trophy hopeful, sophomore quarterback, Bryce Young. Young has completed 288 of 418 pass attempts for 3,901 yards while throwing forty touchdowns and just four interceptions. To complement Young’s passing attack, the Crimson Tide turn to their senior running back Brian Robinson Jr. The senior running back has rushed for 1,016 on 207 attempts and has found the endzone fourteen times.

On the defensive side of the ball, the Crimson Tide is no pushover, giving up just 19.9 points per game on 294.3 total yards per game. those 294.3 total yards break down to 213.6 passing yards and 80.7 rushing yards per game. Like the Bulldogs, the Crimson Tide knows how to put pressure on opposing quarterbacks, forcing forty-three sacks and thirteen interceptions this season.

What a matchup we have on our hands when the Georgia Bulldogs take on the Alabama Crimson Tide this weekend. Both teams are averaging over forty points per game, but somehow the Bulldogs have kept their opponents under a touchdown per game, only allowing their opponent double-digit points in four games this season. Look for the Bulldogs to take this one in a low-scoring, defensive battle.