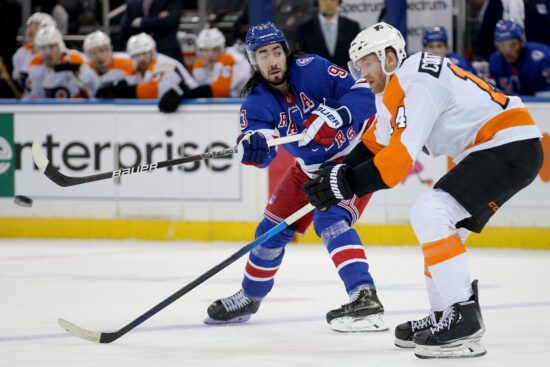 Madison Square Garden will host an interesting game in the NHL on Friday night, as two sides in winning form will collide in New York. The Rangers will be looking for a fifth straight win, while the San Jose Sharks have also been in decent form, winning their last two.

The New York Rangers remain a +1400 chance to win the Stanley Cup this season, but their odds to win the big prize could be cut should they maintain the form that they have shown in their recent outings. The Rangers are on one of the longest winning runs in the Eastern Conference at present, as only the Toronto Maple Leafs, who have won five straight games, have been in better form. New York have won their last four games, and have also picked up wins in eight of their previous ten. They have certainly pounced on the losses inflicted on the Capitals, Hurricanes, and Penguins to solidify their place in the playoff spots in recent games.

The Rangers continued their excellent form with another routine victory on Wednesday night, as they claimed a 4-1 success at Madison Square Garden against the Philadelphia Flyers. New York started the quicker of the two teams and were ahead 2-0 heading into the second period. They made sure of the win with single goals in each of the second and third periods. Artemi Panarin, Dryden Hunt, Chris Kreider, and Jacob Trouba all registered goals.

Sharks In Promising Position In West

The San Jose Sharks may not have been many people’s picks to reach the playoffs this season, but they are currently in a menacing position if they can maintain the form that they have shown in recent weeks. They may need slightly more consistency to continue to climb the standings, as they have won five and lost five in their previous ten. However, they still sit fourth in the Pacific Division at present.

Ahead of their back-to-back games in New York, with a showdown against the Islanders coming before their fixture against the Rangers, the Sharks have won their last two. Their most recent victory came on the road against the New Jersey Devils, as they picked up a strong 5-2 win. Three of their goals were scored in the second period, and the game looked all-but over heading into the third as they were 4-0 ahead. Timo Meier scored twice in the win, while Jacob Middleton, Erik Karlsson, and Noah Gregor also registered goals in the road win.

The New York Rangers would be our pick for the game on Friday. They have been in scintillating form, and that momentum shows no sign of stopping from the evidence that we have seen in recent games.