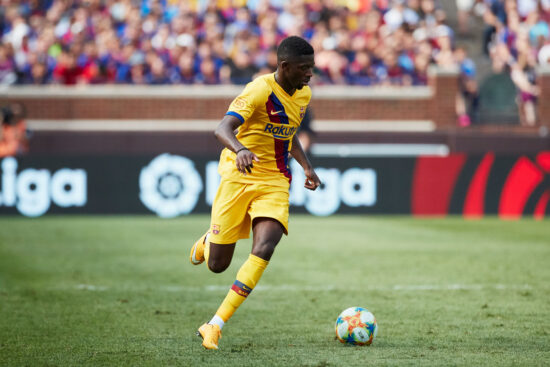 Interestingly, ahead of the summer transfer window, Barcelona winger Ousmane Dembele has offered some words of praise for Chelsea manager Thomas Tuchel.

Prior to his sensational move, the French attacker endured a stunning campaign with Dortmund that saw him rack up 10 goals and 22 assists in just 50 matches.

However, despite what was a simply stunning breakthrough campaign, the 23-year-old’s time in Spain has failed to live up to its hype.

A series of unfortunate injuries and fitness concerns have severely restricted the winger’s playing time.

Having failed to feature in more than 29 games in a single campaign for Barcelona, it’s fair to say that Dembele’s career is certainly stagnating in Catalonia.

Despite an approach that was reported to include a season-long loan, the proposed move fell through, leaving Manchester United without either of their targets.

Despite seeing a potentially big move to the Premier League fall through last summer, Dembele could still see his long-term future lie in England.

With his contract set to expire in the summer of 2022, Dembele’s next destination continues to be speculated.

One club that could have the upper hand when it comes to luring the French winger away from Barcelona is Premier League giants Chelsea.

Dembele, who played his best soccer under the German tactician when the pair were both at Borussia Dortmund, has heaped the praise on his old boss.

Speaking live to BeIN Sports, Dembele has revealed that Tuchel is his preferred choice of manager.

Like I said, Thomas Tuchel really convinced me, he is my favorite manager.

With Thomas Tuchel I played a bit more on the right side at the beginning of the season, and then I was moved more centrally, in the 10 position, sometimes even in the midfield three you see.

He told me to stay a bit more central, have an espresso as he used to say to me, the ball will come to you and then you will go.

It would have been hard to leave Dortmund if Tuchel had stayed.

Although Chelsea is not short of wide attackers, with their squad including the likes of Hakim Ziyech, Callum Hudson-Odoi, and American star Christian Pulisic, there is no denying that when fully fit and firing, Dembele can be clinical.

It is not yet known exactly what Barcelona’s stance is on the future of Dembele, however, with just over 12-months left on his deal, the 26-time Spanish winners will have an important decision to make in the coming weeks.