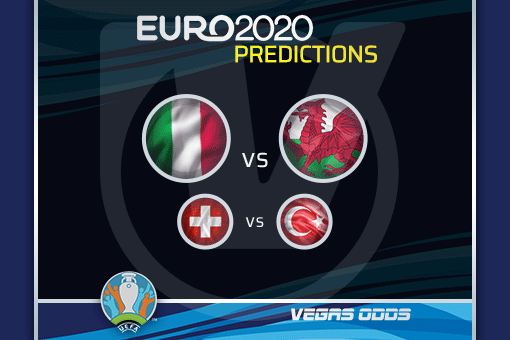 Italy and Wales will meet in Rome on the final matchday in Group A, with the winners taking top spot. The Italians have been mesmeric in the tournament to this point, and will be looking to continue their ten-match winning run.

Roberto Mancini has introduced a style of play to this Italian side that we haven’t seen for a number of years. Italy have always been strong defensively, but the attacking flair that they are showing in EURO 2020 is making them one of the must-see teams in the tournament. They were once again at their dazzling best in their second group game, as they claimed a second consecutive 3-0 victory against Switzerland. The result means that they are the highest-scoring nation in the competition, while they are the only side at present that are yet to concede a goal.

The heart of the Welsh national side was on full display again this past week, as they put themselves into a commanding position to qualify from Group A. Wales were written off by many before the tournament, with many claiming that their exploits when reaching the semi-finals at EURO 2016 was as much down to luck as their own ability. However, they are proving in this tournament that they are a nation that can perform when the pressure is on. Their 2-0 win over Turkey in Baku was gritty, with the magic moments produced by Gareth Bale and Aaron Ramsey.

It could be argued that this is the most difficult challenge Italy have faced over their sequence of ten straight wins, and we will learn more about both nations on Sunday afternoon. However, the Italians have looked incredible thus far, and we wouldn’t want to bet against them.

Switzerland and Turkey also meet on Sunday in their final group game at EURO 2020. Both nations still have a chance of qualifying for the next round, but Turkey’s chances are less likely.

The Turks have made fools of us who claimed that they could be potential dark horses in the competition this summer, as they have lost both games that they have played so far. They haven’t scored a single goal, and their revered defensive record throughout qualification has been sorely missing, as they have already conceded five goals. Their goal difference means that even a win on the final matchday will likely not be enough, but they will at least be looking to end on a high.

The Swiss have a better chance of qualifying for the next round, but only a victory will do if they are able to achieve that. Switzerland have taken just a point from their two games, with that being picked up in a draw against the Welsh in their opening fixture. They were hugely disappointing against Italy, as they were beaten 3-0, as it looked as though they were happy just making up the numbers at the tournament. Switzerland will have one final chance to show their quality, but we wouldn’t bank on it.

Both the Swiss and Turks have been disappointing at EURO 2020, and it’s likely that they will end the tournament with another subdued game. A draw looks to be the safest bet.