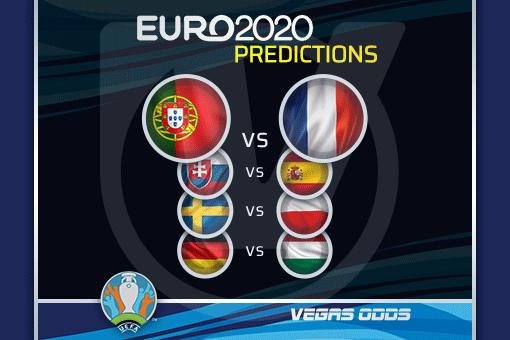 The biggest game on the final night of group games will take place at the Puskas Arena in Hungary, as France bid to get revenge over the nation that beat them in the final of EURO 2016. Defeat for Portugal could spell the end to their hopes of regaining the European title.

France come into their final group game at the top of Group F, but it’s fair to say that many expected them to have already booked their passage through to the next round. They were held in their most recent game by Hungary, as the minnows claimed a famous point against the world champions. However, a point in this final game will be enough to ensure their place in the round of 16.

Portugal are in a more precarious position, as they will need at least a point to stand a chance of being one of the best placed third-place teams. They were handed a massive defeat in their last game against Germany, as they were beaten 4-2. The Portuguese will need to respond to that setback on Wednesday night.

Tension will be high in Hungary on Wednesday, as both nations will be hopeful of getting the result they need to go through. However, based on Portugal’s defending in their last game, we can’t see past a French win.

Germany finally arrived at EURO 2020 with a victory against Portugal, as they moved up to second in the standings. Another win against Hungary in Munich would seal at least second, while they could leapfrog France depending on the result in Hungary.

That performance against Portugal was the Germany of old under Joachim Lowe, as they were scintillating in the final third of the field. Kai Havertz scored his first goal of the competition in the victory, while the impressive Robin Gosens also scored in the big win.

It would be unwise to completely rule out Hungary just yet, as they have fought admirably throughout the group of death. A victory for them would see them finish with four points, which could be enough to get through to the next round. Confidence will be high after taking a point off France. However, they will likely come back down to earth with a thump against the Germans.

Spain haven’t even started at EURO 2020 to this point, as they have started the competition without a win in two. They need to win their final group game against Slovakia to get the points required to reach the next round of the competition.

Luis Enrique raised eye-brows with his squad selection before the start of the tournament, and the performances so far have done little to vindicate his selections. Spain were toothless against Sweden in a goalless draw, and were wasteful when drawing 1-1 to Poland last time out.

Slovakia are currently in second in the group, but will be aware that a draw will be enough to see them finish above the Spanish. However, they will need to bounce back after being beaten by Sweden in their last game.

Slovakia were excellent on the opening night, but looked to run out of ideas quickly against Sweden. That doesn’t bode well for their chances in this game, and we expect Spain to get a scrappy first win at EURO 2020.

Sweden could seal their spot at the top of Group E with a victory against Poland on Wednesday evening. The Poles will need a win themselves to keep their hopes of progression alive.

Sweden are top of the group at present with four points, as they beat Slovakia in their most recent match. That win means that they have the opportunity to finish this group as the unlikely winners. A victory would secure top-spot, while a draw could open the door for Spain or Slovakia to pounce.

Only a win will do for Poland, as they remained alive in the tournament with a deserved draw against Spain on Saturday night. That was a much improved performance by the Pole’s, and they will need to play at that standard again against Sweden.

Sweden have been solid at EURO 2020 so far, and we could see them sneaking another win in this game.