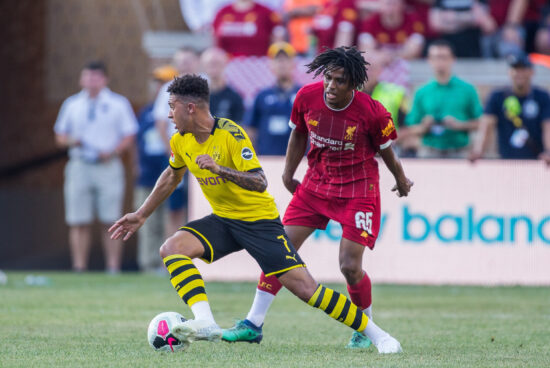 Manchester United has reportedly begun negotiations with German side Borussia Dortmund over a possible summer transfer of attacker Jadon Sancho.

That’s according to leading soccer journalist Fabrizio Romano, who claims the Red Devils have finally acted upon their long-standing interest in the Borussia Dortmund winger.

Having flirted with the prospect of bringing the English attacker to Old Trafford for the best part of two years, the Premier League giants finally appear to be edging closer to sealing what will be one of the sport’s biggest ever deals.

Last summer famously saw the Red Devils’ hierarchy fail in a late approach for the 21-year-old. However, unsurprising to fans, this year has seen the club reignite their interest.

The Rise of Sancho

After beginning his professional career with London-based side Watford all the way back in 2007, Sancho later moved to Manchester City’s youth academy before opting to continue his development abroad.

Having joined Borussia Dortmund in 2017, Sancho has since enjoyed a monumental rise to the forefront of European football.

Last season was arguably the Englishman’s most successful campaign and ultimately led to seeing his name linked with a bumper move to the likes of Manchester United.

After now being with Borussia Dortmund for four years, Sancho has featured in 137 senior first-team matches, in all competitions, directly contributing to a massive 114 goals, along the way.

So impressive has Sancho been over the last few years, the 21-year-old now finds himself as a regular in Gareth Southgate’s England squad.

Currently preparing to play a part in the Three Lions’ European Championships, which are set to kick off on Friday, England, with the help of Sancho, will be hoping to finally end their 55-year long wait for a major international trophy.

All Roads Lead to Old Trafford

Despite being tipped to join Manchester United for the past 48 months or so, according to recent reports, the Red Devils do appear to be the closest to signing Sancho that they ever have been.

The latest in the ongoing saga comes from Romano, who claims that the 20-times league winners have agreed on personal terms with the player and have now begun negotiating a fee with the selling club.

It has been noted that the popular German outfit is demanding a whopping $115.5m in exchange for their talented youngster.

Should Manchester United’s owners sign off a deal worth well over $100m, Borussia Dortmund’s Sancho would become the 10th most expensive soccer player in the history of the game.