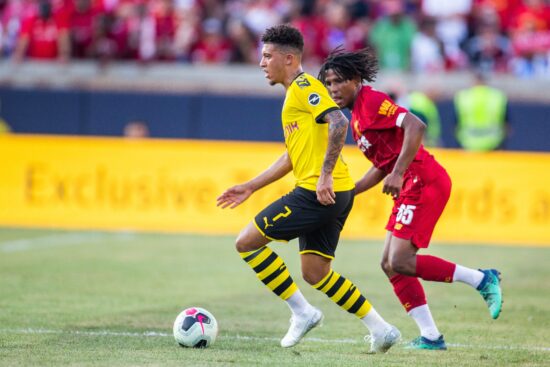 If you’re a soccer fan, you will be familiar with Manchester United’s drawn-out and relentless pursuit of Borussia Dortmund’s Jadon Sancho.

The Red Devils, who have long desired a right-sided attacker, have been hot on the heels of Sancho for nearly two whole seasons now.

Having seen their finances hampered by the ongoing COVID-19 pandemic, Manchester United failed their quest to sign Sancho last summer.

Despite being odds-on-favorites to land the England international, as per Sky Sports, Ole Gunnar Solskjaer saw a whopping $126.77m bid rejected on deadline day last year.

Seemingly undeterred in their quest to land one of Europe’s most highly-rated wingers, the Red Devils are set to reignite their interest once this summer’s transfer window opens in the coming weeks.

After making the decision to leave Manchester City’s youth academy in favor of a move to Borussia Dortmund in 2017, Sancho’s time in Germany has been a huge success.

Since making his first-team debut just a few weeks after making the pioneering switch, Sancho has gone on to feature in 133 matches, in all competitions.

Best known for his versatile and equally devastating attacking prowess, the 20-year-old has already racked up a hugely impressive 108 direct goal contributions.

In light of what has been a monumental rise in European soccer and ahead of this summer’s transfer window, Borussia Dortmund’s hierarchy have reportedly slapped a $118m price-tag on their star attacker.

Slightly lower than their valuation last summer, the German outfit’s decision-makers appear firm in their stance that if Manchester United want him – they’ll have to reach to the very bottom of their pockets.

Having failed in their pursuit for Sancho last summer and with another year now off his four-year contract, Manchester United have been disappointed to learn Borussia Dortmund are still demanding upwards of $100m.

According to a recent report from Eurosport, Manchester United still views Sancho as too expensive. The eight-times Bundesliga champions’ demands are now expected to jeopardize the Red Devils’ chances of achieving what they failed to do 12-months ago.

It is not yet known exactly how serious Manchester United are about bringing in Sancho, however, with positive news recently reaching fans regarding striker Edinson Cavani’s desire to extend his Old Trafford stay, returning for Sancho could now be right back at the top of Solskjaer’s ‘to-do’ list.