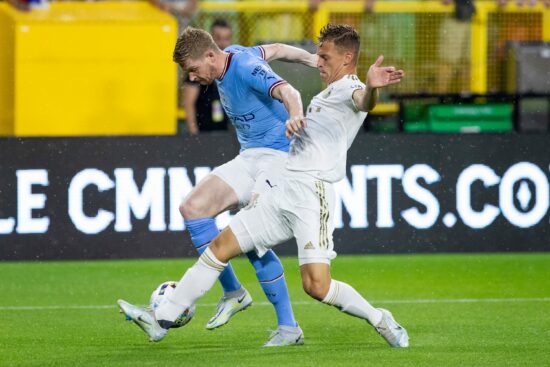 You have come to the right place if you’re looking for the best Premier League prop odds.

In this latest article, we will take a closer look at which Premier League soccer player will register the most assist during the upcoming 2022-23 season.

The odds on all the other players come in the form of a four-figure number.

*These markets are not currently available on BetOnline, but can be found on offshore bookmakers*

Manchester City’s playmaker is tied with legendary Thierry Henry for the most Premier League assists within a single season. Each has made 20 assists – Henry did it in 2002-03; De Bruyne did it in the 2019-20 season.

Unlike Henry, who’s retired since 2014, De Bruyne is still in his prime. The 31-year-old is considered one of the best midfielders of his generation, the evidence being that he’s won numerous accolades throughout his career.

De Bruyne was the top assist maker in the Premier League in three seasons since 2015. Last season, he finished in 10th place with just eight assists, which was his worst record since coming to Manchester City seven years ago.

Is he going to do better this season? Oddsmakers sure think so, they’ve made him the #1 favorite for the Premier League 2022-23 Most Assists bet.

Although he’s never done it before, Trent Alexander-Arnold is a strong candidate to make the most assists in the 2022-23 Premier League season. The reason is that his expertise is crossing the ball from the right flank.

Liverpool wing back is turning just 24 in October, but he’s already achieved a lot in his career. He’s already recorded 33 assists, with the 2019/2020 season being his most successful thus far. That’s when he assisted for 13 goals in total.

Last season, he was only a tiny bit less productive, with 12 assists. What’s interesting is that only one player in the entire league made more assists than him. The player in question is his Liverpool teammate Mohamed Salah who recorded 13 goal assists.

Priced at +1200, Mohamed Salah might be the top dark horse for the Premier League 2022-23 Most Assists betting market. Not only is he the player who made the most assists last season, but his record from earlier campaigns shows that he loves helping his teammates to score.

Since coming to Anfield in 2017, he’s recorded a total of 46 assists, with 10+ happening in three separate seasons. Another reason why he looks like a good bet is that Salah is expected to do a lot in the upcoming campaign.

With Sadio Mane gone to Bayern Munich, the Egyptian is going to have an even more important role in Liverpool. He’s going to be the Reds’ key man in the 2021-22 season, both when it comes to scoring and making assists.

Other Premier League Prop Odds to Watch Out For

Manchester United’s Bruno Fernandes is surprisingly sitting in the #3 position in the list of favorites for the Premier League 2022-23 Most Assists bet. We say “surprisingly” because he recorded just six assists last season. However, a season earlier, he made twice as many assists.

His new teammate Christian Eriksen is another player to watch out for. Famous for his vision and inch-perfect passes, the Dane has just arrived at Old Trafford this summer after having an impressive season with Brentford.

Over at Tottenham Hotspur, there are several players capable of making more assists than everyone else in the Prem. Among those is Heung-min Son, Harry Kane, and Dejan Kulusevski.

Mason Mount is the player with the shortest odds on Chelsea’s roster, while Bukayo Saka leads the way for Arsenal.