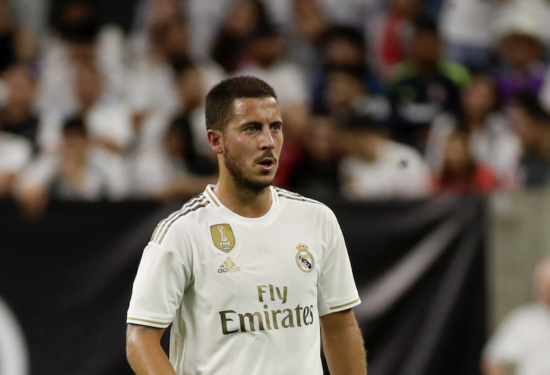 Real Madrid manager Zinedine Zidane has reportedly lost his patience with attacker Eden Hazard and is preparing to offload the Belgian later this summer.

Despite being tipped to be the man to fill Cristiano Ronaldo’s boots, Hazard’s time in Madrid has majorly failed to live up to expectations.

With a medical list as long as your arm – since joining just 22-months ago, the 30-year-old has already missed a total of 58 games through injury.

When available for selection though, Hazard has featured in 40 matches, in all competitions, but has just four goals for Real Madrid to his name.

If the Belgian’s poor numbers weren’t bleak enough, Wednesday night saw him line up against former club Chelsea in the Champions League semi-final.

To add insult to injury – Thomas Tuchel’s Blues ran riot and with the game eventually ending 2-0 on the night and 3-1 on aggregate, Hazard, alongside his teammates, were sent packing.

Domestically, although the Spanish side is still very much in the hunt for their 35th La Liga title, seeing off fierce rivals Atletico Madrid and Barcelona with just four games to go, will be easier said than done.

Should Zidane’s men fail to lift a major trophy, there are growing concerns the French legend could resign and walk away from his managerial duties.

Following what has been a disappointing week for manager Zidane, amplified by their recent European misery, it has been reported by Marca that the Frenchman is set for a summer squad exodus.

One of the names tipped to be moved on is wide-attacker Hazard.

It’s not just the club’s players who are facing the chop though – Marca also claims that potential replacements for Zidane himself are also being considered.

In addition to Hazard and Zidane though, full-back Marcelo and creative midfielder Isco are also understood to be heading for the Santiago Bernabeu’s exit.

However, despite looking to change the complexion of their once illustrious squad, Real Madrid are aware that offloading their stars may not be an easy task.