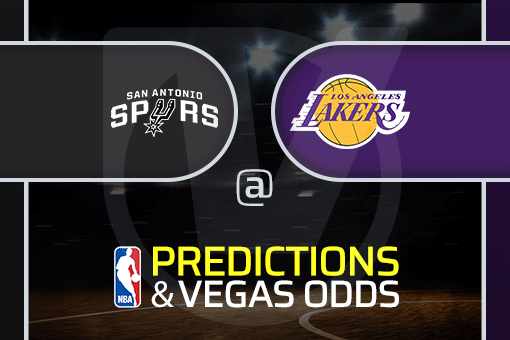 If you’re in search of the latest NBA betting odds and Spurs vs Lakers prediction, look no further because Vegas Odds has you covered.

The Lakers are playing good basketball and just acquired Rui Hachimura, and the Spurs could be selling at the NBA trade deadline.

The Spurs are 14-33 on the year and headed for a lottery pick. Doug McDermott and Josh Richardson have also been rumored to be dealt at the deadline, so the rebuild is here in San Antonio. The Spurs are 2-9 in January and have lost two straight games coming into this two-game set in LA (they play the Clippers on Thursday).

Keldon Johnson has led the way and shown a ton of promise, averaging 1.5 PPG with 4.9 rebounds and Devin Vassell is second with 19.4 PPG, although he has been out since January 3 with a knee injury.

The Lakers have won three of the last four games entering Tuesday’s contest with the Clippers, and they beat Memphis last Friday and engineered a stunning comeback against Portland.

LeBron James is playing like an MVP, but Thomas Bryant has been the player that has surprised many, and he showed up big time with 31 points and 14 rebounds against the Trail Blazers.

A day after an unbelievable comeback win, the Lakers traded for Rui Hachimura in a deal with the Wizards, and he could be suiting up against the Spurs.

The lakers will be playing the second leg of a back-to-back, but the Spurs shouldn’t be too much of a concern for LA. The Lakers won each of the three contests this season, and two of those were by double digits, so the Lakers win another game with Anthony Davis’ return coming soon.