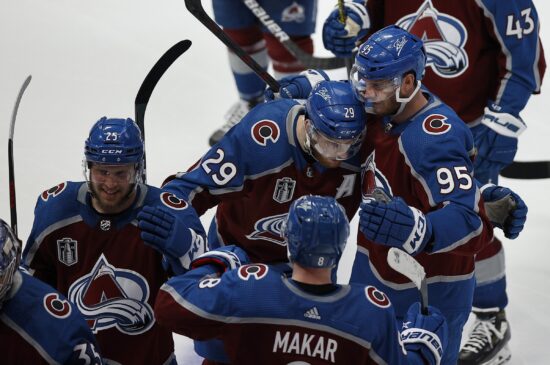 NHL playoff action continues this weekend as the Stanley Cup Finals game two between the Colorado Avalanche and Tampa Bay Lightning takes place at Ball Arena. The Avalanche will be looking for a second straight victory in the series to take a 2-0 lead ahead of the series moving to the Amalie Arena, while the Lightning could level the tie before they have home advantage for the next two games.

Avalanche Have The Momentum

The Lightning has already demonstrated the importance of momentum throughout the playoffs this season, and the Avalanche currently holds that advantage after a thrilling game one. It was one of the most exciting opening games in the Stanley Cup finals, with the teams sharing seven goals including overtime.

However, the Avalanche eventually managed to seal the win, as they scored the only goal in the additional period. Colorado started the game in excellent fashion with three goals in the opening period, but the Lightning got back on terms with two unanswered goals in the second period.

Darcy Kuemper enjoyed a steady game in goal for the Avalanche, as he saved 20 of the 23 shots that he faced to average .870. Meanwhile, the goals in the win were scored by Valeri Nichushkin, Gabriel Landeskog, Andre Burakovsky, and Artturi Lehkonen.

The Tampa Bay Lightning are likely to be unfazed by losing the first game in the Stanley Cup finals this year, as they have already been beaten in two game ones in the playoffs this season. They progressed after seven games in the opening round against the Toronto Maple Leafs, while they beat the New York Rangers in six in the Eastern Conference Finals.

However, this is a slightly different proposition, as the Avalanche has been so dominant in home games throughout the season. Still, the Avalanche gave as good as they got in the first game of the Stanley Cup finals, and the game could have easily swung in their favor in overtime on another night.

The Lightning scored twice in the second period to draw level at 3-3, but the rub of the green favored the Avalanche on night one. Andrei Vasilevskiy enjoyed a fine night in goal despite the defeat, as he averaged .895 after saving 34 shots from 38 attempts.

This could be a crucial game in the series already, as the Lightning would gain momentum with victory on the road. We find it hard to be put off by the defending champions after a battling performance in game one, and they would be the pick. We could also once again see over 1.5 goals being scored in the first period.