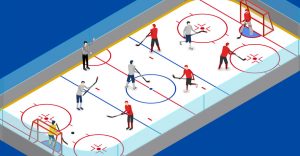 With a 3-0 win over Vancouver Canucks in the 7th leg, Vegas Golden Knights booked a spot in the Western Conference final, the second time in the franchise history. They’re going face-to-face with Dallas Stars, who got there by winning the 7-game series against Colorado Avalanche in a nerve-wracking game on Friday afternoon. The Western Conference Final starts this weekend with the Stars vs Golden Knights Game 1. Let’s see what should you expect from that game!

Even before the start of the Playoffs, Vegas Golden Knights were #1 favorite for winning the 2020 Stanley Cup. Best hockey sportsbooks did adjust their odds slightly when Vegas lost two games in a row to Canucks, which set the score to 3-3 before Game 7.

Speaking of which, the decisive game was played on Friday evening, in which we saw both teams performing very well defensively. After two periods, the score was still 0-0. In fact, Vegas scored their first goal at 13:53 in 3rd period, when Shea Theodore scored from a powerplay.

With just six minutes left on the countdown clock, Canucks had to go all-in. They played the last couple of minutes with an empty net. Golden Knights took advantage of that and scored two more goals. The key takeaway from Game 7 is that Vegas can be terrific in the defense when needed. Their offense, however, will have to do better in the upcoming games if they want to win the Western Conference final.

The thing is that Vegas is facing one of the best defenses in the NHL. Dallas Stars conceded only 177 goals in the 69 games of the regular season, fewer than any other team in the West. Golden Knights, in comparison, allowed 211 goals. They did, however, play two more games than Stars.

Oddsmakers have made Vegas Golden Starts the favorite to win the series and we have to agree. This team simply has better players that the opponent. However, the Western Conference Final is not going to be a walk in the park for them.

They’re facing a tough team that’s extremely good when defending. Scoring against Dallas is not going to be easy, especially not in Game 1. Still, they definitely have the player quality to grab themselves a win, either in the regulation or in the overtime.