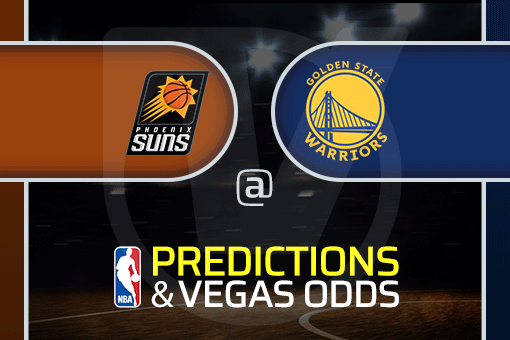 The game between the Suns and the Warriors is undoubtedly a delight for all the NBA fans. These two sides play the best basketball in the league right now and hold the top two seed in the standings.

Golden State has unreal Steph Curry, the top favorite for the NBA MVP award, while on the other side, the Suns don’t have such a dominant individual but play more as a team.

The 25-year old Kentucky Wildcats alumni averaged 23.2 points per game, 4.9 boards, and 4.5 assists. His shooting percentages are at a high level as well, 45.8% FG and 40.3% for three points. He was just starting to find the rhythm when the injury caught him.

The Suns won their 18th straight game last night, beating the Pistons in Phoenix, 114-103. Cameron Payne and Cameron Johnson did an excellent job of delivering points off the bench, with 19 each, neutralizing Booker’s absence. Bridges scored 18, Ayton 17 and Landry Shamet 14.

After losing to the Suns two days ago, the Warriors slipped down to place No.2 in the West and the league, half a game behind the franchise from Arizona. The goal for tonight is pretty simple – get even with the Suns and take back the top seed. Easier said than done, that is for sure, but the Dub Nation has high standards all the time.

GSW didn’t play any games after a 104-96 defeat to the Suns, and they had enough time to relax and rest. That especially goes for Curry, who had one of his worst performances in the last 12 months against Phoenix. Steph scored 12 points, was shooting 4-for-21 from the field, hitting only three threes in 14 attempts.

Though, Jordan Poole played incredibly well, scoring 28 points and proving that he has everything it takes to win the NBA’s Most Improved Player of the Year award. Andrew Wiggins also had only 10 points, and he too needs to be better

Head to Head – Edge on Suns’ Side

As said, the previous event finished 104-96 in Phoenix’s favor.

Not having to play against Booker will make things much easier for the Warriors, who also have a home-court advantage. Yes, the Suns are great in teamwork, but covering up an absence of one of the best scorers in the league against such a gifted team like the Warriors is almost a mission impossible. That is why we predict GSW’s victory.