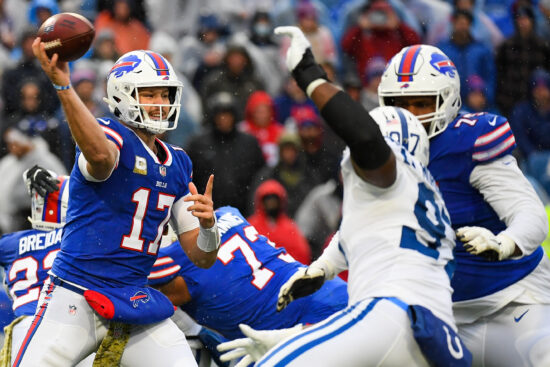 Losing in the AFC Championship game hasn’t always signalled the end of the road for teams in recent years, with Kansas City providing the best example of bouncing back the following year to win the Super Bowl.

The 2017 version of the Jacksonville Jaguars will always provide concern as they collapsed against the Patriots and their downward trajectory still hasn’t been reversed, but you always had the feeling that the Buffalo Bills had too much talent and were too well run to suffer a similar fate.

In fact, they’ve regularly been ranked as the favorites to win the Super Bowl this year despite the occasional shaky performance, but the recent blowout loss to the Colts has seen their odds drift sharply.

Nobody has managed to retain the Super Bowl since Tom Brady’s New England Patriots in 2004, but there will be some optimism that their comfortable win over the Giants last night signals the start of them getting stronger down the stretch.

The biggest concern for Buffalo just now isn’t about trying to reach the Super Bowl itself, but merely trying to retain their division crown after losing top spot to New England last week, while the pair are set to meet two times in December so those matchups will go a long way to deciding the winner of the division.

As a result, Buffalo are now the 4th overall favorite at +800, while the Bucs are now way out in front at only +550. The resurgence from Kansas City sees them in second place at +700, and the sportsbooks clearly see the Rams returning to form as they sit at +800.

Buffalo faces a tough Thanksgiving trip against the Saints on Thursday before taking on the Patriots in Week 13, so the results of those two matchups will also have an impact on those odds – if they lose one or both, then they may drift even further.