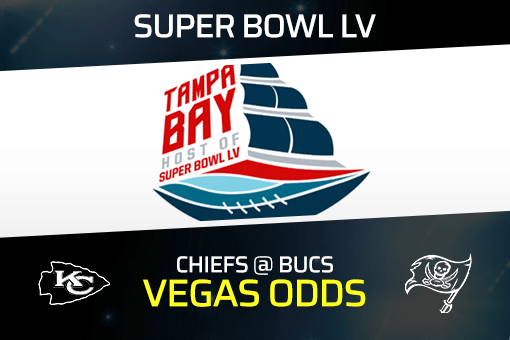 It’s the Super Bowl Sunday! Tonight, we’re going to find out who’s going to win the most prestigious title in the NFL – Tampa Bay Buccaneers or Kansas City Chiefs?

It’s going to be a pretty close game, at least that’s what oddsmakers think. At the moment, the winner of the last year’s Super Bowl is favored, although only slightly. Add to that the fact that the odds keep on moving in Bucs favor and you’ll see why Super Bowl LV is expected to be an incredible matchup.

Patrick Mahomes, Travis Kelce, Tyreek Hill – with these guys playing like they did in the 2020 Super Bowl, the Chiefs should have no problems winning the title once again. If you take a look at the Vegas odds released by top online bookmakers, you’ll see that such a scenario seems very possible.

With most online sportsbooks, the moneyline odds on the Chiefs range from -155 to -175, which suggests Kansas City is the favorite. If they do win the game, they’re going to become the first team to win back-to-back Super Bowls since 2003-04.

The team that did it back then was the New England Patriots. Guess who their quarterback was at the time? No other than Tom Brady, the man who’s making his tenth Super Bowl appearance tonight.

This time, he’s doing it with Tampa Bay Buccaneers. He’s been brilliant in the postseason, helping his team win against such favorites as the New Orleans Saints and the Green Bay Packers.

Bettors know that the Bucks love slaying giants, which explains why the odds have started moving in favor of the Florida franchise at many online sportsbooks.

When Super Bowl betting markets opened at Bovada, the Chiefs were clear favorites. However, since then, we saw the moneyline odds changing from -175 to -155. The reason? People have started putting their money on Brady and co.

This isn’t just the case with Bovada but with many other online sportsbooks. For instance, BetMGM spokesperson said Friday that the sportsbook has received a couple of “megabets” over the last couple of days.

Those bets, however, are point spread wagers instead of moneyline bets.

Betting action is trending in Tampa Bay’s direction. BetMGM received some big bets on the Bucs covering the 3-5-point spread lately. The biggest of those was the $2.3 million bet at -115 odds.

What this means is that if the Bucs win or, at least do not lose by more than three points, the bettor is going to win another $2 million.

What’s interesting is that such a scenario happened in each of the previous eight duels between these two teams. In fact, the last time the Chiefs beat the Buccaneers by more than three points was back in 1993.

With Patrick Mahomes on one end and Tom Brady on the other, everyone’s expecting to see a lot of touchdowns in tonight’s game. Even oddsmakers do! They have set the point margin at 56.5, which is the third-highest in Super Bowl history.

What this means is that odds on both Over 56 and Under 56 points are in the ballpark of -110. When this market is concerned, the numbers have been pretty much the same since the day the odds were initially published.