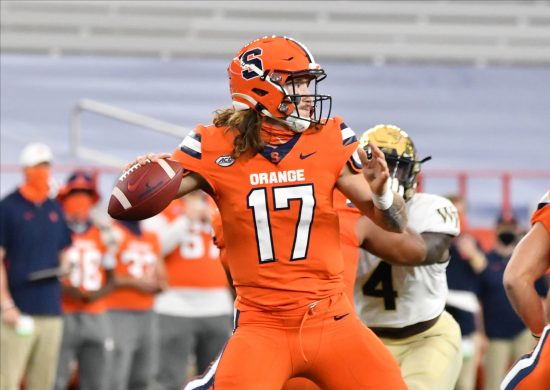 The upcoming game between the Syracuse Orange (1-4) and Clemson Tigers (5-0) is widely seen as a one-sided affair. The Tigers have won all five of their games so far and they are given a massive 99.4% chance of success.

These are just the odds we like. On the other hand, the Tigers seem to have a paltry 0.6% probability of winning this one which definitely can’t be too good for morale. Nevertheless, we will take a closer look at each of these teams and see what they bring to the table respectively.

Syracuse vs Clemson Odds to Win

Where and When to Watch Illinois vs Wisconsin

The Syracuse Orange is opening as a heavy underdog on the point spread with bookies not too sure about the moneyline just yet. With an overwhelming advantage according to ESPN, though, it’s easy to write Syracuse out. Yet, we want to take a closer look at the team’s most recent performance instead.

Syracuse has a hard time scoring and defending. There is little to suggest that this will change over the next several days to catch the Clemson Tigers by surprise. The Orange is scoring 19.6 average points per game and allowing as many as 29.6 points per game.

The team suffered two back-to-back losses versus LIB and DUKE with 38-21 and 38-24 respectively. The overall team statistics aren’t too bad, although quarterback Tommy DeVito has played a rather underwhelming few games.

He has 593 passing yards and has been alternated with the team’s other quarterback Rex Culpepper, who has done slightly worse overall. In terms of rushing yards, though, running back Sean Tucker is doing great.

Wide receiver Taj Harris has definitely been putting in mileage with his 434 receiving yards. Last, but not least, you have lineback Geoff Cantin-Arku who has tackled 37 opponents so far.

The Clemson Tigers have been no joke this season. They have won each of their last five games and in quite the spectacular fashion. The Tigers have defeated wortwhile opponents such as Miami, and they have completely destroyed GT (73-7) and CIT (49-0).

Clemson are coming strong in the season and they already average 48.4 points per game in offense and only allow around 12.0 in defense. In fact, this is one of the lowest in the entire NCAAF this season.

The Tigers have had quite a bit of leeway to rotate a lot of players as well. Quarterback Trevor Lawrence has clocked in 1,544 passing yards and he has also let D.J. Uiagalelei and Hunter Helms to clock in some time.

Running back Travis Etienne has already 436 rushing yards and wide receiver Amari Rodgers is at 429 receiving yards. As to lineback Baylon Spector, he has put in 28 tackles this season and is certainly getting a little rusty.

The team’s 73-7 rout of Georgia Tech, though, is a clear signal that the Tigers remain one of the strongest, if not the strongest team this season. Things are so out of control that some offshore sportsboos are even giving Syracuse Orange +46 (-110) on the Spread.

A tempting option for sure.