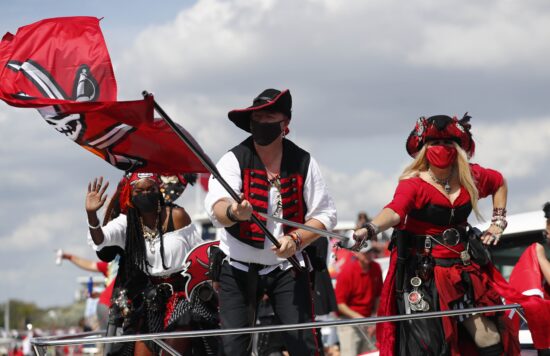 Tampa Bay Buccaneers have just arrived in Washington DC where they’re going to be welcomed by President Joe Biden in the White House later today.

The reason behind their trip to the capital is the celebration of the Super Bowl win, which is set to commence at 11:15 am in the South Lawn, where Tom Brady and his teammates are going to be welcomed by President Joe Biden and second gentleman Douglas Emhoff.

The trip to the White House is just the beginning of a busy week for the Bucs. After the festivities in the White House, the reigning champions are meant to receive their Super Bowl rings on Thursday. Two days later, they’re going to the training camp, where they should start practicing on Sunday.

The Buccaneers will have seven weeks to prepare themselves for the 2021 NFL season. As the reigning Super Bowl champions, they’re supposed to open the new season on Thursday, September 9, when the Dallas Cowboys come to Tampa.

The Bucs visit marks the first time in four years that a Super Bowl winner has come to the White House. Last year, the Kansas City Chiefs canceled their celebration due to the COVID-19 pandemic.

In 2019, the New England Patriots decided not to attend the traditional ceremony, one year after Donald Trump canceled the celebration for the Philadelphia Eagles.

Speaking of Trump, he famously has a good relationship with Tom Brady. However, the quarterback hadn’t attended a single Super Bowl ceremony at the South Lawn during Trump’s presidency and he found the time to have a subtle dig at the former President during the ceremony today:

As a reminder, Brady won Super Bowl two times during the Trump era, while wearing the New England Patriots jersey.

His friendship with the ex-President could hit a rough patch following Tom Brady’s decision to attend the ceremony hosted by Trump’s successor.

However, it’s been a long time since Tom Brady attended a Super Bowl celebration in the White House the last time. Until the footage surfaced of him entering the plane to Washington, many believed he was going to skip this one as well.

The reason behind the talk had nothing to do with his allegiance to Trump (whose MAGA hat he was seen keeping in his locker in 2016). Instead, the suspicion arouse for the fact that Brady’s wife Gisele Bündchen is turning 41 today.

Another fact that added to the rumor of Brady missing the celebration is that he’s famous for skipping White House trips. He attended the festivities only on three occasions, the most recent of which happened in 2005 when George W. Bush was the US President.