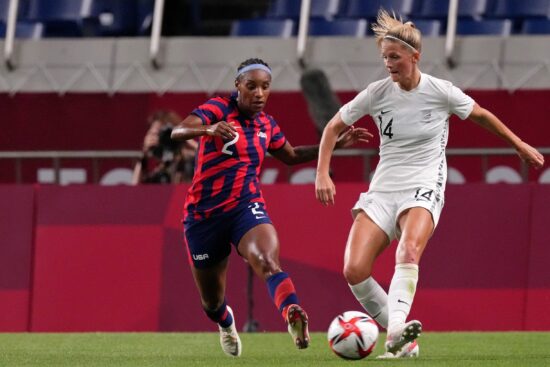 Canada destroyed the US team’s dreams of reaching the Olympic gold in Tokyo. The northern neighbors were better after 90 minutes of fierce soccer.

They will face Sweden in the finals, as Blagult beat Australia in their semifinal clash.

Penalty Luck Against Team USA in This Case

Canada scored the only goal in this contest from the penalty kick, with Jessie Fleming converting the shot. It was the 75th minute when Tierna Davidson made a mistake by bringing down Deanne Rose in the box. Even though things weren’t that clear initially, the referee consulted the VAR system, which confirmed that the American player did commit the foul.

Team USA’s second goalkeeper, Adrianna Franch, couldn’t do anything. Franch replaced Alyssa Naeher in the first half due to Naeher’s knee injury earned after 20 minutes of play.

The starting goalkeeper tried to clear away the danger during Canada’s attack but landed awkwardly, apparently twisting her knee. Naeher attempted to continue the match, but it was obvious that the pain is too disturbing, which is why she left the pitch 10 minutes following an incident.

Naeher was in the center of attention during the quarterfinal game against the Netherlands, as she saved three penalty kicks, one in the regular 90 minutes and two during the shootout.

This shock definitely had a negative impact on the American players, who managed to put themselves together in the second half and create a few chances. Yet, the Canadian goalkeeper, Stephanie Labbe, was superb today, and she stopped pretty all the rivals’ attempts. On the other side, one small mistake led to a goal, and there was no way back for Team USA.

Though Blow for America

Even though Vlatko Andonovski’s crew didn’t play as many expected throughout this tournament, they were still a big favorite for the gold.

Canada defeated the US side only the second time in 62 matches, and this is one of the most painful blows of the American teams in recent times. They now haven’t reached the Olympic finals in the last two Olympics.

Canada will meet Sweden in the finals. Blagult defeated Australia 1-0, with the only goal coming in the first minute of the second half when Fridolina Rolfo hit the back of the net.

The finals are set for August 6, and according to the bookmakers, Sweden is a huge favorite for clinching the gold. The odds on Blagult are at -125 to win, while on the other side, Canada’s victory during the regular 90 minutes is priced at +360.

Team USA is also a solid favorite for triumphing in the match for third place. Rapinoe and the girls to win during the regular time is +100, while for the Matildas to do the same is +160.

It would be a huge blow for the American team not to win a medal for the second straight time. One of the best generations in the history of ladies’ football is stepping down following this tournament, and it would be excellent for them to add one more medal to their account.