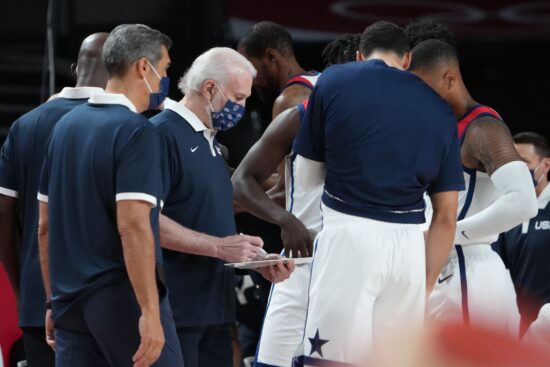 Gregg Popovich and his guys bounced back following an opening defeat at the Olympic tournament, defeating Iran with 120-66 today. It was a dominant display of the American team who looked much better than against France but against a much weaker team.

A 54-point win is always good, regardless of the opponent. It is good for various reasons, but the biggest one is that the team receives positive energy. That is why coach Popovich gave all of his players a chance today, wanting each of them to put his name into the scoresheet. Which eventually happened.

The Americans opened the match strong, getting the first period in their favor, 28-12, and turning up the pressure in the second, which saw them leaving for the break with a 30-point lead, 32-18.

Excellent shooting from deep was the main weapon of the US team, who ended the game with 19 three-pointers in 39 attempts. Seven of them were delivered by Damian Lillard, with the superstar guard scoring all of his 21 points from behind the arc.

Devin Booker found his groove racking up 16 buckets, shooting 6-for-9 from the field, and having three steals. Kevin Durant had a quiet day, posting 10 points and five boards and assists each, but adding two steals and three blocks.

Zach LaVine had a solid performance, scoring 13 points off the bench and also assisting eight times to his teammates. The Bulls’ guard could be an X-factor in each game, as he fulfills his duties perfectly for now. Jayson Tatum had 14 points, Khris Middleton 10.

On the other side, the veteran center, one of the Asian basketball legends, the 36-year old Hamed Haddadi, scored 14 points and grabbed 7 boards. Mohammad Jamshidi had the same number of buckets.

The Czech Republic Coming Up Next

Up next, a much tougher challenge awaits the American team – the Czech Republic. Led by the Chicago Bulls’ guard, Tomas Satoransky, and the former Washington Wizards’ big man, Jan Vesely, the Czechs have one interesting group of guys. They are much weaker than France when looking at the names in the roster, but still capable of delivering a decent fight.

The Czech Republic earned the ticket for the Olympic Games in Victoria, where they eliminated the hosts, Canada and Greece. Satoransky’s dagger against the Canadians was one of the highlights of the entire Olympic qualifications, and that 103-101 win was arguably the biggest one in the Czech’s recent history. Later on, in the finals of that tournament, they swept the Greek team, 97-72, reaching the first-ever trip to the Olympics as a sovereign state.

This is a very important match for the US team because it might show whether the wounds earned against France healed or not. As said, the Czechs don’t have the quality to endanger the Americans, but for sure, they present a tough test that will answer a lot of questions.