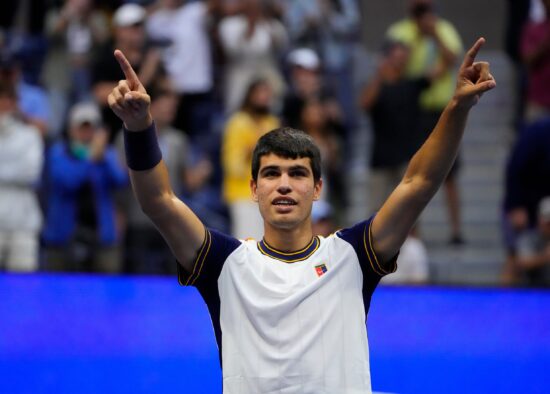 Even though Novak Djokovic stands as the biggest star in New York, the current part of the US Open is completely marked by two teenagers – Carlos Alcaraz and Leylah Fernandez.

All the spotlights in the Big Apple are pointed towards them, and we just might witness the birth of two new champions.

The 18-year old Spaniard survived a five-set marathon against the German player, Peter Gojowczyk, whom he defeated 5-7, 6-1, 5-7, 6-2, 6-0. With this victory, Alcaraz became the youngest player in the US Open quarterfinals since 1963 and the Brazilian Tomaz Koch. Along with that, he became the youngest quarterfinalist at any Grand Slam since Michael Chang in 1989.

Alcaraz spent three hours and thirty-one minutes on the court before defeating Gojowczyk, who was highly motivated and performed very well. He faced cramps several times throughout the match, and had to take a timeout due to massages. On the other side, Alcaraz, too, sought help from the doctor, but his youth prevailed in the end.

Felix Auger-Aliassime is the next opponent for the Spanish player, and in this one, the Canadian prospect is a pretty strong favorite. The odds on his win are -200, while another big victory for Alcaraz is priced at +160.

The only other quarterfinal match set so far is between Botic Van De Zandschlup and the second seed, Daniil Medvedev. No need to tell who is the favorite there. Odds on Medvedev are -5000.

After eliminating Naomi Osaka, arguably the biggest favorite for winning this Grand Slam, Leylah Fernandes beat the 2016 US Open champion this Sunday night. She was better than Angelique Kerber after three sets and a comeback.

The German player won the opening sequence, 6-4. Still, after a close second set which ended with Fernandes’ win in the tie break, Kerber lost confidence and was easily handled by the Canadian in the decisive moments. The result of the third set was 6-2.

This was the best possible birthday present for the Canadian who turns 19 today. Her rival in the quarterfinal is Elina Svitolina, who eliminated Simona Halep in straight sets, 6-3, 6-3. The Ukrainian is a massive favorite, with the odds on her win set at -250, while on the other side, Fernandes’ success is +300.

The 73rd player in the world trailed 4-2 in the second set, but her fighting mentality once again emerged, showing that this young lady has quite the future. It seems that being in the situation with her back against the wall made Fernandes more aggressive, and that was when she began pulling out fantastic shots from all over the court. If she manages to repeat a performance like this in the quarterfinals, Svitolina might be in danger.

Barbora Krejcikova and Aryna Sabalenka meet in the second quarterfinals. The Belarusian, and the highest remaining seed in the tournament, is a favorite here, -160, while this year’s Roland Garros winner is set at +130.