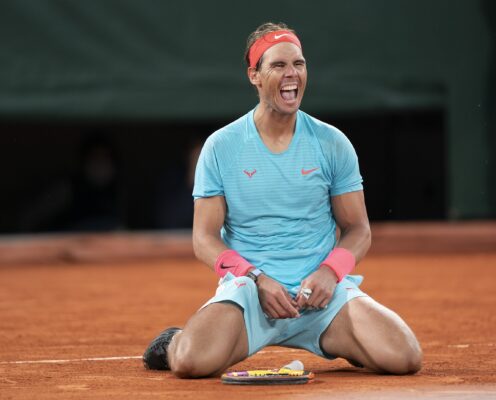 The second Grand Slam of the tennis season takes place at the end of May, as players compete on the clay at the French Open. Rafael Nadal has dominated the competition throughout his career, but can anyone break his stranglehold on the event?

The French Open has served as the second Grand Slam of the season throughout its history, and is revered for being one of the hardest events to win. It is synonymous for being the only Slam that is played on clay, and that has been the case since the surface switched from sand in 1908. The surface coupled with the fact that players have to compete in the best of five sets means that it is one of the most gruelling of the season for players. This year’s event will be the 125th French Open, but will be the 91st Grand Slam event, as it became a premier event in 1925.

READ MORE: Preview for the Women’s French Open 2021 at Roland-Garros

The French Open has been Rafael Nadal’s playground since 2005, as the Spanish star is revered as the ‘King of Clay’. The Spanish star has won 13 titles since then, which has included four consecutive victories between 2005 and 2008, and five consecutive victories between 2010 and 2014. He will be looking to match that record once again this year, as he has won every French Open since 2017. The only other player that can nearly rival Nadal’s dominance on the surface is Max Decugis, who won eight titles during the amateur era.

The French Open is typically one of the easiest Grand Slams of the season to predict, as it is one that Nadal has dominated throughout his career. He has competed in 16 French Opens, and has won the title on 13 occasions. His last defeat at the French Open came in 2016, as he was beaten by Marcel Granollers. His win rate at the Grand Slam is staggering, as he has won 98% of the matches that he has played at the French Open.

Of course, there are a number of other players that have performed on the clay, and it would be unwise to rule them out completely. Djokovic typically goes deep in the French Open, as he won in 2016, and has reach the final in four of the previous nine events. Last year he was beaten by Nadal in the final. Dominic Thiem made it to the final in both 2018 and 2019, but was beaten by Nadal on both occasions. He has a decent win percentage of 80%, which is much higher than his rate for any other Grand Slam.

Who will win the men’s French Open title:

A case can be made for Theim to go deep in France, but when it comes to a winner of the French Open, it would appear to be difficult to bet against Nadal winning his 14th title.