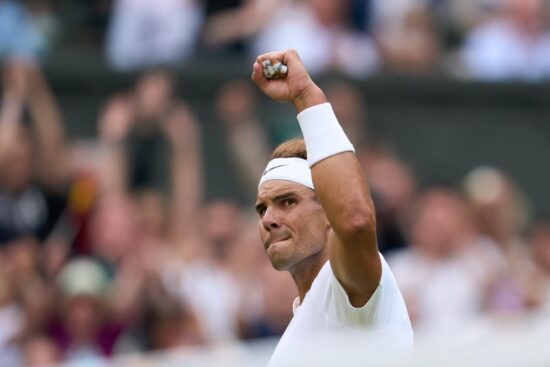 It was the news that no tennis fan wanted to hear, as Rafael Nadal was forced to pull out of Wimbledon on Thursday after suffering an abdominal tear during his quarterfinal showdown with Taylor Fritz. His inability to compete means that Nick Kyrgios automatically qualifies for the final. He will meet either Novak Djokovic or Cameron Norrie, who met in their semi-final on Wimbledon Day 12.

Nadal’s decision to pull out means that his dream of winning a calendar Grand Slam is over. The Spanish superstar had already won the Australian Open and French Open this year and was looking to become the first male since Rod Laver to win all four Grand Slams in the same calendar year. However, he admitted in a press conference at Wimbledon that ‘happiness is more important than titles’, and few would argue against that sentiment.

It beggars belief just how much pain Nadal would have gone through during his quarterfinal with Fritz on Wednesday evening, as he visibly picked up the injury at some point during the second set. However, he went on to win the game after a fifth-set tie break. His dedication to continue, and not quit when his back was against the wall is just a hallmark of the legendary champion that he is.

The news of his injury has meant a change to his odds when it comes to the US Open later in the year, as Nadal has drifted to a +600 chance for the final Grand Slam of the season. That still sees him as the fourth favorite in the betting, but it is likely that he will drift further should he require an operation for the injury. Any potential surgery could rule Nadal out for the remainder of the year, and he may not return until around the start of the Australian Open in 2023.

Friday was set to be the biggest game of Nick Kyrgios’ career, as he was set to compete in his first-ever Grand Slam semi-final. Instead, the biggest match of his career will now come on Sunday, as he has the opportunity to win a first Grand Slam title. Kyrgios may be surrounded by controversy. But there’s no denying that he is an extremely talented player when he brings his A-game.

His odds to win the title this year have now been cut to +275. He could actually go off as favorite should Cameron Norrie shock Novak Djokovic and reach a first Grand Slam final. However, the outright pick remains unchanged, as the Serbian boasts a frankly ridiculous five-year unbeaten run at Wimbledon.