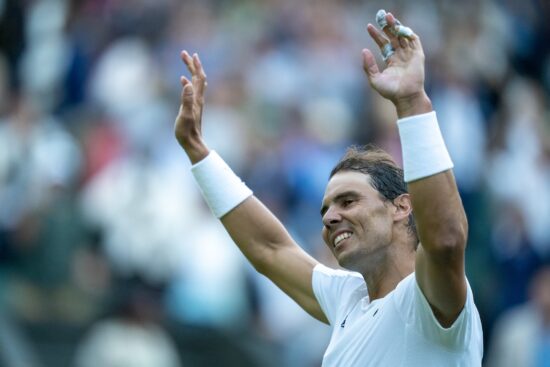 The quarterfinals once against take center stage on Wimbledon Day 10, as the four remaining ties will be played on the two main show courts. These clashes will have a lot to live up to, as all four that took place on Wimbledon Day 9 went the distance. But, which players will book their spots in the final four?

The action on Centre Court gets underway with the third women’s quarterfinal, featuring Simona Halep and Amanda Anisimova. Despite all the shocks in the women’s half of the draw, our pre-tournament pick is still going strong, as Halep looks to win a second Wimbledon title.

It had been a long wait to see the Romanian back on the grass. Her appearance in Birmingham was the first time that she appeared on the surface since winning at SW19 in 2019. Halep reached the semi-finals of that competition but has really stepped it up a gear at the Grand Slam. She is yet to drop a set in the four previous matches that she has played and was back to her dominant best against fourth-seed Paula Badosa earlier in the week. Halep dominated proceedings and won 6-1, 6-2, as her Spanish rival failed to break Halep’s serve.

Amanda Anisimova is already enjoying her best-ever run at Wimbledon this year, while she will be looking to reach the semi-finals of a Grand Slam for the second time in her career. The 20-year-old has dropped two sets on her way to this stage, with both coming in comeback victories against Lauren Davis and Cori Garff. She faced no such issues in the round of 16, as she saw off Serena Williams’ conqueror Harmony Tan in straight sets.

This is the fourth meeting between the players. Anisimova’s only win came on the clay at the French Open in 2019, while Halep won the following meeting in Paris, before recently beating the American in straight sets on the grass at Bad Homburg in June. We expect Halep to win, but we also wouldn’t be surprised if all three sets are needed.

Rafael Nadal has been in stunning form throughout Wimbledon this year, and despite injury issues, he is still on course to win the Grand Slam in 2022. The Spanish star has needed to wait a long time to add to his two victories at SW19, with his latest success coming over ten years ago in 2010.

He has reached at least the semi-final stage in the previous two editions that he has competed, with his latest effort being ended in a historic five-set clash against Roger Federer in 2019. However, his game this year looks more suited to the grass, and he has looked untroubled in all four games that he has played.

In the previous two rounds, he has come up against seeded rivals but has breezed past in straight sets. The latest win was recorded against Botic van de Zandschulp, as he won 6-4, 6-2, 7-6.

Taylor Fritz will be competing in his first-ever Grand Slam quarterfinal on Wednesday, with his previous best run in a Slam coming when being knocked out in the fourth round of the Australian Open earlier in the season. However, the American hasn’t faced a bigger challenge than this at SW19 this year.

To this point, the 23-year-old has played unseeded players in each of the previous four rounds, and he is yet to drop a set. During that period, he has been taken to two tiebreaks, but he won commandingly against both Alastair Gray and Alex Molcan. Fritz does have a came that could trouble Nadal though, as he has averaged 18 aces per match in the previous two rounds. He also knows what it takes to beat the Spaniard, after winning the previous match between the two in the Indian Wells finals in straight sets earlier this year. However, this is a different proposition, and we struggle to see past the two-time winner.