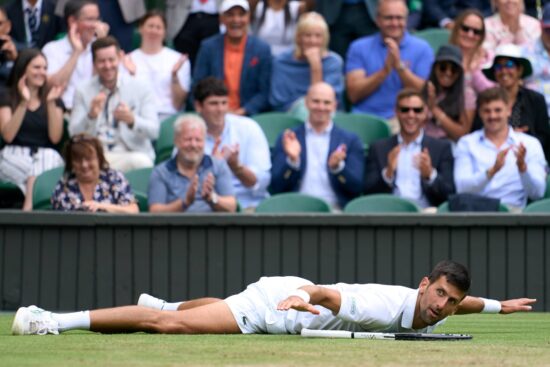 It has been yet another exciting Wimbledon in the men’s half of the draw, but both top seeds remain in the hunt. Novak Djokovic is chasing a seventh title at SW19, while Rafael Nadal is looking for a first Wimbledon success in over ten years. However, both face stern tests in the semi-finals on Wimbledon Day 12.

There’s no getting around it, this is the semi-final that we all want to see. There is no love lost between Rafael Nadal and Nick Kyrgios, which means that we could see an ill-tempered affair full of drama on Centre Court this Friday.

Nadal is chasing history in 2022, as he is looking to become the first male to win a calendar Grand Slam since Rod Laver. The Spanish star looked imperious throughout the early rounds. But injury issues looked to be resurfacing in his quarterfinal showdown against Taylor Fritz. After leveling the match at a set apiece, Nadal looked set to retire after picking up an injury. However, quitting doesn’t appear to be a word in the legendary star’s vocabulary, as he managed to eventually force the fifth set despite not looking at his best.

After a grueling fifth set, the scores were tied at six games apiece, meaning that a champion’s tiebreak was needed to determine the winner. Nadal stepped it up a gear, and Fritz didn’t seem to have any response. The Spanish star eventually won 10-4, hitting a remarkable 168 winners in a match that went well over four hours.

It’s fair to say that Nick Krygios has never had a better opportunity to reach a Grand Slam final. The Australian spoke about that in his post-match interview on Wednesday, as he revealed that he thought his time had gone. However, there is something about Krygios and Wimbledon. Beneath all the drama that he brings, he still saves his best tennis for the courts at SW19.

Kyrgios’ matches have been slightly tamer since his win last Saturday. Instead, his talking has been done on court. His quarterfinal showdown with Cristian Garin was one of his more comfortable afternoons, as he won in straight sets. The Australian hit 17 aces, and broke on three from six opportunities, smashing a total of 105 winners.

Nadal has a 67% win rate against Kyrgios, as he has won six of the nine meetings. Both players have recorded victories at Wimbledon, with Krygios winning their 2014 meeting and Nadal picking up the success in 2020. Much will depend on the Spaniard’s fitness. But if at his best, we could see him coming out on top in another marathon match.

There will be a British player in the men’s semi-finals at Wimbledon for the first time since 2016. Cameron Norrie will be looking to join the short list of home stars that have reached the Grand Slam final. However, he will certainly have a tough challenge ahead of him, as Novak Djokovic stands at the opposite end of the court.

Going into Wimbledon this year, Norrie had never reached a semi-final of a Grand Slam. However, he did at least have a chance after winning at Indian Wells in 2021. The British number one has been tested throughout the tournament this year, but standout wins against Steve Johnson and Tommy Paul were nothing compared to his coming-of-age win against David Goffin in the quarterfinals.

Goffin pushed Norrie to his limit in that match, and constantly had the British contender on the ropes. Even in the fifth set, it looked as though the match could swing either way. However, Norrie eventually found a way through the test, as he broke on five of the eight opportunities presented to him. But, he will need to be more measured in his approach against the six-time champion after making too many unforced errors against Goffin.

What can you possibly say about Djokovic and his run at Wimbledon? The Serbian is the clear favorite to win the men’s title for the seventh time this year and is backed up by the fact that he hasn’t lost at SW19 since 2017. That unbeaten run was certainly put to the test in his quarterfinal showdown against the impressive Jannik Sinner.

Djokovic found himself two sets down in that match but battled back with convincing sets in the third and fourth. Sinner looked like a player that was beaten by the star of the fifth set, but Djokovic still produced possibly the shot of the tournament to set up the 6-2 win in the fifth. Sometimes players have an air of invincibility about them, and that is the impression we get with Djokovic at present. The Serb holds a 1-0 record against the Brit, and we would expect the top seed to come through this test and set up a shot at a seventh Wimbledon title.