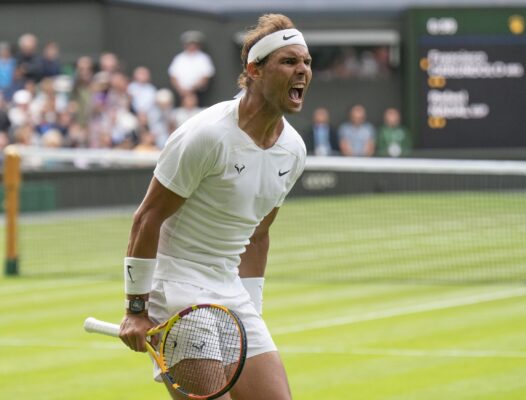 Wimbledon Day 3 brought a number of big results, including the shock defeats for Andy Murray and Emma Raducanu. However, the action doesn’t stop at SW19 – the big names are back out in force for Wimbledon Day 4, with both Rafael Nadal and Iga Swiatek in action.

Top-seed Iga Swiatek looked extremely dominant on her return to Wimbledon earlier in the week, and she has reaffirmed her place at the top of the betting to win the women’s championship this summer. The two-time French Open winner breezed past Jana Fett in the first round, as she won in straight sets 6-0, 6-3. It was the most dominant performance that we have seen on the grass this summer by any female player, and it’s hard to ignore the momentum that she is building, with that victory over Fett being her 36th win in a row.

Lesley Pattinama Kerkhove qualified for Wimbledon as a lucky loser but quickly got to work in the first round against Sonay Kartal. She needed all three sets to get the win against the Brit, eventually winning 6-4, 3-6, 6-1. This is already her joint-best performance at Wimbledon, as she also reached the second round last year. In truth, Swiatek shouldn’t face too many issues, and a chance will be taken on the Pole winning 2-0.

It has been a long 12 years since Rafael Nadal last won the Wimbledon title, but his dream of a calendar Grand Slam remains on after a dominant showing in the first round. The Spanish star is the second favorite in the betting, and he looks to have a relatively straightforward passage through to the semi-finals. Nadal needed four sets to see off Argentinean Francisco Cerundolo in the first round, but he eventually won 6-4, 6-3, 3-6, 6-4. The French Open winner won 70% of the points on his first serve but only 47% on the second.

Ricardas Berankis could be a potentially tricky opponent for Nadal in the second round, as he looked very impressive in the first round. This is the fourth time that he has reached the second round at Wimbledon, as he successfully managed to see off big-serving Sam Querrey earlier in the week. Berankis was excellent from first serves in the first round, as he won 85% of the points. It could be a testing match for Nadal, but we could see him coming through in four sets.

The leading American contender for Grand Slam glory closes play on Centre Court on Wimbledon Day 4. Cori Gauff will be looking to build on her final appearance at the French Open earlier in the year, but will also likely need to perform better than she did in the first round to see off Buzarnescu with no issues. Gauff needed to come back from a set down in the opening round against Elena-Gabriela Ruse, while the American recorded eight double faults, which hardly helped her chances. However, she recovered in excellent fashion, eventually winning 2-6, 6-3, 7-5, and she will be looking to continue that momentum today.

Buzarnescu is the more experienced of the two players, as the 34-year-old holds a career record of 452-273. However, she is yet to get past the third round at Wimbledon and is currently ranked 127 in the world. Her best career ranking was 20th back in August 2018. She was easily able to make it through to this round after recording a straight-sets victory over Nastasja Mariana Schunk earlier in the week. However, we would expect a more dominant showing by the eleventh-seed in the second round.