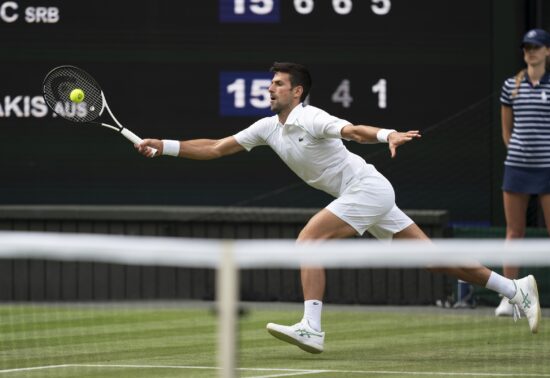 The action steps up a gear on Wimbledon Day 5, as the third-round ties at SW19 finally get underway. All third-round matches will be played across the next two days, with round of 16 matches being played on Sunday. For the first time in many years, matches will be played on the first Sunday at the Championships, which means that there is no rest for the leading contenders.

There will be an all-Serbian clash on Centre Court on Friday, as Novak Djokovic looks to take a step closer to winning the Wimbledon title for the seventh time. The world number one has been in stunning form throughout the championships so far, and he made extremely light work of Australian Thanasi Kokkinakis in the second round.

This looks set to be the biggest test that Djokovic has faced so far at Wimbledon, as 25th seed Miomir Kecmanovic stands opposite him on Centre Court. His compatriot is enjoying his best run at Wimbledon to date.

However, he needed four sets to see off John Millman and Alejandro Tabilo in the previous two rounds. It doesn’t help his case that he has lost both previous matches against Djokovic, including a three-set loss at the Serbia Open earlier this year.

One of the stories of the Championships this year could come in the form of Ons Jabeur. She has been knocking on the door of Grand Slam success for a while now, and often brings her best game to SW19. This year she could become the first Arab woman to win a Grand Slam title, which would certainly make her an inspiration to millions of young girls around the world.

The 27-year-old has looked unshakeable on the court to this point, as she has won each of her previous two matches in straight sets. Her latest victory was a dominant 6-4, 6-0 win against Katarzyna Kawa on Wednesday. She served two aces in that win and won a very respectable 70% of the points on her second serve.

It could be a very interesting showdown against 19-year-old Diane Parry, as the teenager looks to be one of the brightest new stars on the tour. She knocked out 31st seed Kaia Kanepi in straight sets in the opening round, before seeing off Mai Hontama 6-3, 6-2 in the second round. She beat a top ten player earlier in the season at the French Open, as he came back to beat Barbora Krejcikova in Paris. I’d expect Parry to give a very solid account of herself on Centre Court, but it’s difficult to see past Jabeur.